The Unit for the Victims commemorates International LGBTI Citizenship Day

This is an opportunity to vindicate the rights and freedoms of all human beings, especially given the persistence of discriminatory acts against people with sexual orientations and diverse gender identities (OSIGD in its Spanish acronym). 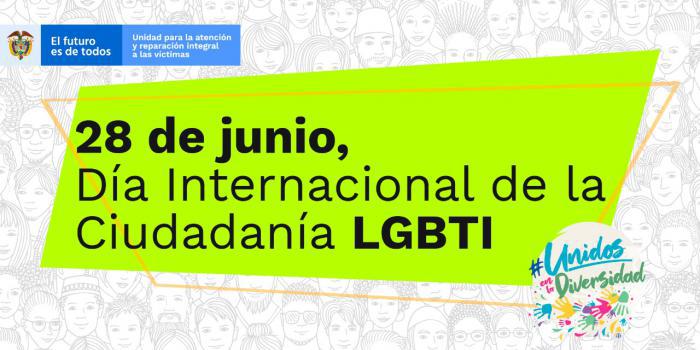 Decriminalization of homosexuality with the disappearance of articles 323 and 329 of the Colombian Penal Code in 1981 marked a milestone for our country. Many years before, on June 28th, 1969, in New York, protests and demonstrations were triggered to demand tolerance towards this community.

Other events preceded to dignify the struggle of people with diverse sexual orientations and gender identities. On May 17th, 1990, the World Health Organization (WHO) eliminated homosexuality from the list of mental illnesses and, in 1994, through ruling T-539/94, it was decreed that population with OSIGD couldn’t be object of discrimination in Colombia.

Through 2011’s 1448 Law, extended by 2021’s 2078 Law, the Unit for the Victims began the implementation of the differential approach, in order to favorably adapt the aid, assistance and integral reparation measures for this population affected in the framework of the armed conflict.

According to the Single Victims Registry, there are 4,088 people who self-recognize as population with diverse sexual orientations and gender identities. Of this number, 3,497 are aid subjects, which means they have been linked to the institutional offer of the Unit and the SNARIV. Of the registered victims, 8.88% indicated having some disability, 19.99% some ethnicity and 60.15% are currently between 29 and 60 years old. It should be noted that forced displacement continues to be the victimizing event with the greatest impact.

Through administrative and judicial compensation, the Unit has benefited LGBTI victims with a total amount of $2,779,055,565 COP. Since 2015 until May 2021, it has delivered 1,552 humanitarian assistance wire transfers with an investment of $665,632,000 COP to forced displacement victims’ households where the authorized person declared to be part of the OSIGD population.

Looking to contribute to life projects strengthening and the emotional reparation for the effects caused by violence, 340 psychosocial attention actions have been applied, and the participation of LGBTI victims in the Effective Participation Victims Boards has been guaranteed, which were created for their representation throughout the national territory.

“Today, June 28th, when LGBTI Citizenship Day is commemorated worldwide, we want to send a special greeting of recognition and dignity to all victims of the conflict with sexual orientations and diverse gender identities included in the Single Victims Registry, which add up to approximately 4,088 people,” said Ramon Rodriguez, the Unit for the Victims’ General Director.

He added that “through the integral aid, assistance and reparation mechanisms contemplated by the Law with a differential approach and psychosocial support, we guarantee participation, visibility, inclusion and respect for the freedoms of LGBTI victims, so the damages and experienced events don’t happen again.”

Within the framework of this commemoration, and for those who voluntarily and in an informed manner want to change their name or gender in the Single Victims Registry, the entity has provided a route so that through face-to-face, telephone and virtual assistance channels, they can request the novelty of registration due to name and/or sexual orientation and gender identity change as a guarantee of the citizenship right.