Victims project the proper use of their compensation

Between January and February, more than $ 2.1 billion in compensation has been delivered in Tolima. 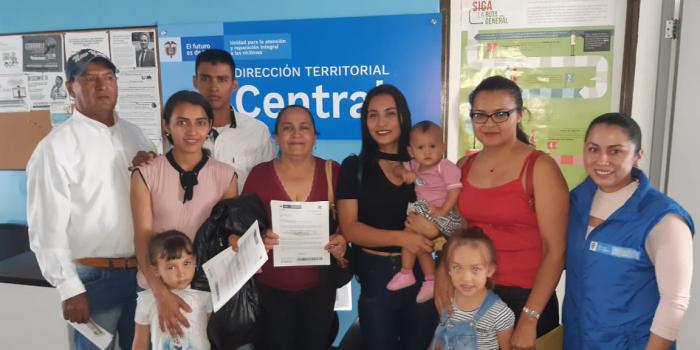 On the most recent day of administrative reparation that took place at the headquarters of the Central Territorial Unit for the Victims Unit in Ibagué, Tolima, victims of the armed conflict resident in the capital of Tolima and surrounding municipalities were treated.

Yaneth Siábato Gil, a beneficiary of “My Business” program, led by Social Prosperity and who was also notified for the delivery of the economic reparation, delivered by the Victims Unit. Visibly excited, she said that, with the compensation money, she will finance the project of a store that is already in service for her neighbors in the municipality of Libano.

"And that's why I want the Victims Unit to visit me to realize that the money was invested and that a good investment was made and money was not wasted", said Yaneth.

As part of the dynamics of the day, the attendees in addition to receiving the letters had a space for guidance and advice on the appropriate investment of resources and against the other services provided by the entity; talks, in which emphasis was placed on the gratuity of all procedures and they were warned that it is not necessary to go to processors.

Coming from the municipality of Palocabildo but displaced twice by insurgent groups from municipalities such as Roncesvalles and Prado, Alfonso Osorio Cardozo, an elderly father with seven children, was another of the victims repaired economically by the Victims Unit.

"The project that I have to invest the resources, is in fish farming and for coffee cultivation, in a plot that I have in Palocabildo", was the response of Alfonso Osorio, as opposed to investing these resources.

To date, in this year 2020, in the department of Tolima, the Unit has paid more than $ 2,100 million to about 500 victims for compensation within the route of integral reparation.