Entrepreneurs will have the Social Stamp #UnidosPorLasVictimas

In just two months, there are already 986 characterized enterprises, of which 93% belong to violence women victims. 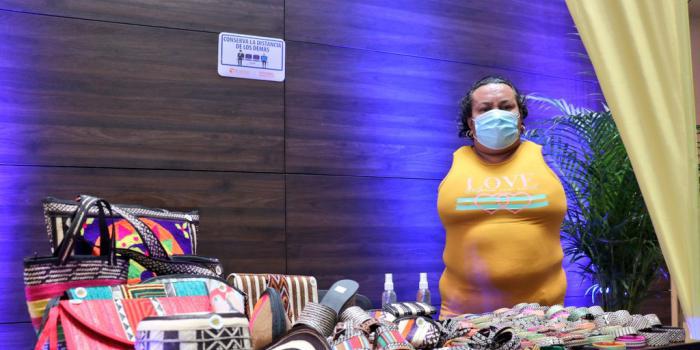 During the launch of the Social Stamp #UnidosPorLasVictimas, men and women violence victims showed their ventures in the following production lines: accessories, agriculture, food and beverages, ancestral products and handicrafts, among others.

This activity, which was broadcast this Wednesday through the entity's social networks, aimed to promote the strengthening and productivity of the conflict’s victims in their projects’ development, as confirmed by the Unit for the Victims’ General Subdirector, Lorena Mesa: “We can say that in two months we already have a total of 986 characterized enterprises, of which 93% belong to conflict’s women victims. As for the population level, the afro and indigenous population have a high prevalence in the associative and traditional productive processes, adding up to almost 20% of the total of characterized enterprises.”

It should be noted that, within the universe of characterized entrepreneurs, 11% have some kind of disability and most of the entrepreneurial population is between 32 and 60 years. "Our first goal is to characterize each of the more than 9 thousand people who have identified themselves as entrepreneurs, and who are part of the Single Victims Registry," ​​said Mesa, stressing that there are 986 enterprises that are registered in the productive lines of construction, personal care, cultural and sports productions, livestock, lingerie and home products, clothing and footwear production, among others; 58% are developed in the Colombian countryside through agricultural and livestock processes.

Part of the process happens when the entity receives the information from enterprises related to the entity from different sources, the next step is the characterization process of the supply and productive, distributive and informative capacity, as well as the identification of the level of formalization and technical and financial knowledge that the enterprise has.

“Our allies are private companies, international cooperation and the government entities that will help the enterprises to connect and be able to do business. That is why the Social Stamp plays an important role, since it will identify the victims’ enterprises, so the commercialization is successful," said the General Subdirector.

In Quibdo, the fashion designer Cleiner Cabadias said: "To invest in ventures is a good use of resources. It’s one of the key factors that must be taken into account, and it is very important for us entrepreneurs."

For Dora Sanchez and Luzmarelys Escandon, Artesanas de Grass Accesorios’ owners in Barranquilla, Atlantico, there is no set back to fight for their dreams: “I started with $50 thousand COP that my son lent me, and today we already have a goldsmith workshop, we also weave by hand and we work semi-precious stones.”

Also in Barranquilla, Nicolas Correa works in his typical sweets company, and he proudly comments on its beginnings: “We were born with $30 thousand COP. Thanks to a family recipe, we have grown and now we have become more technical. Many thanks to the Unit for the Victims.”

This is how the Unit recognizes those who bet on their life projects reconstruction, building from the core of their social, family, local, community and national environment, contributing to Colombia’s economic reactivation. That is why this Social Stamp is a hallmark the Unit for the Victims provides for products and services made by entrepreneurs who are part of the Single Victims Registry.