Director of Victim Unit requests support of congressmen for the victims

Ramón Rodríguez Andrade, director (e) of Victims Unit, proposed to the congressmen of the Follow-up Commission to the Victims Law to know and promote the proposals of victims for the National Development Plan, and work on the reforms that it requires Law 1448 of 2011, on which there are already some consensuses. 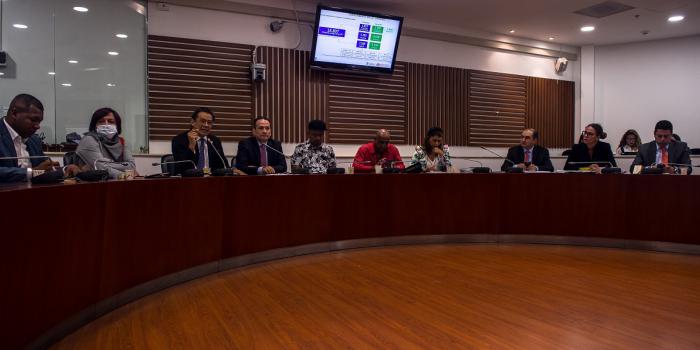 Several consensuses on the reform of the Law of Victims and Land Restitution (1448 of 2011) were evident during the session of the Commission of the Congress of the Republic that follows up on the implementation of such Law and in which they participated, in addition to the congress members that comprise it, the directors of the Unit for Victims and the Land Restitution Unit, representatives of the Comptroller's Office, the Procurator's Office and the Ombudsman's Office, and leaders of the National Table of Victim Participation.

Among the consensuses of the different participants to the session are: to achieve greater articulation among the different entities that make up the National System of Attention and Integral Reparation to the Victims, especially between the territorial entities and the Nation; Extending Law 1448 - although it is not clear for how long -; get more financing to be able to fulfill the victims with integral reparation; and find ways to make reparation measures more effective.

The director (e) of Victims Unit, Ramón Rodríguez, said: "We seek to be very effective and we call on all of us to work hand in hand, we already have a diagnosis and we look for the Congress to link up and consider what reforms must be made to Law 1448 and that Conpes that comes to finance the execution of victim’s public policy. Seven years is more than enough to have an experience and know what adjustments we have to make to really fulfill the victims with responsibility, as the President of the Republic, Iván Duque, has stated in all his interventions ".

In a similar sense, the president of the Follow-up Commission to the Law of Victims, and representative to the Chamber Jhon Jairo Hoyos, said: "There are enormous budgetary difficulties in the country and today more than one hundred billion pesos are required to complete the plan of attention to victims, that is not possible in the next four years, we have to make a plan of longer term and a review of the effectiveness in the use of said resources ".

At the same time, the congressman considered important "the appeal of all the victims for participation through the seats of victims in the Congress, as well as the follow-up that the Commission can do to the projects carried out in the territory, with the which can help the institutions and the victims, to take this process forward ".

The creation of 16 seats in the House of Representatives is contained in the Peace Agreement between the Government and FARC but was denied in the Congress of Republic. On this subject, the Coordinator of the National Table of Participation of Victims, Odorico Guerra, indicated that "to say that those 16 seats will be for the guerrilla is a revictimization".

At the end of session, Ramón Rodríguez made another proposal to the congressmen: "To hold a work session next week, with the work inputs of victims in the regions, which we accompany, for the National Development Plan, with the same methodology of National Planning; I propose that the victims explain to them what was done, and that from the Congress that incidence be done so that those needs and expectations that the victims have are reflected in the Development Plan. It is a simple but well-prepared document".

During the session, Elena Ambrosi Turbay, Delegate Procurator for the support to victims of armed conflict and the demobilized ones, highlighted the work done by the Victims Unit in the midst of the inconveniences: "The most advanced measures (reparation to the victims ) are those of the Unit, but not those of the territorial entities, "he said, and in another moment, he added:" The Unit has done an incredible job, but it is not enough to coordinate the System (National Comprehensive Service and Repair to the victims)".

During the session, the director (e) of Victims Unit highlighted the advances in issues of care, prevention, assistance, and compensation, although he acknowledged the existing difficulties. For next year the budget of the entity is just over 1.9 billion pesos but it is not enough to move forward at a speed that allows the more than eight million registered victims of conflict to be fulfilled, during the time it remains in effect. Law 1448 of 2011, which goes until the year 2021.

Among the results that the official showed are: more than 4,320,000 turns of aid and humanitarian attention to A value close to 2,420 million pesos; something more than 611,000 people assisted in the psychosocial in the Health and Social Protection program of the Ministry or in the Group Emotional Recovery Strategy of the Victims Unit; about 796,000 individual indemnities delivered for a value exceeding 5 billion pesos; accompaniment of 261 thousand households in processes of returns and relocations; accompaniment to the 1,057 tables of municipal, departmental and national victims, made up of 869 people; 21 days in eight of the 44 countries where the almost 23,000 victims of conflict are living abroad.