National Victim Participation Board advances its work plan for 2020

On the second day of the meeting, the Executive Committee of the Bureau and the Directorate of Interinstitutional Management of the Victims Unit, proposed the actions to strengthen the impact on public policy, so that the victim population reaches its integral reparation. 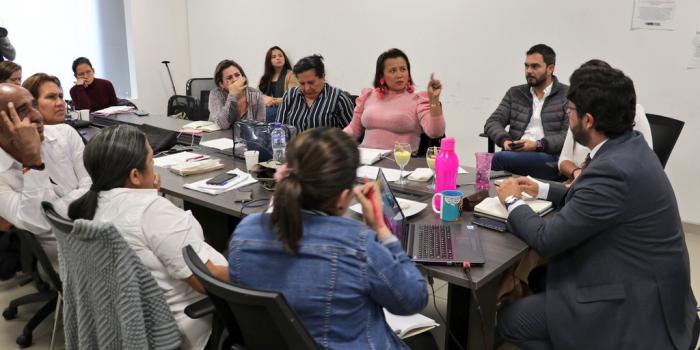 A day to coordinate actions for the benefit of victims of the country during 2020, met the Executive Committee of the National Table for the Effective Participation of Victims, and the Directorate of Inter-Institutional Management (DGI) of the Unit and its working groups, on their second day of session.

Aura Helena Acevedo, Director of Interinstitutional Management, explained to the Executive Committee how the Sub-directorates of Participation, Territorial Nation, Snariv, and the Offer Group will tend to strengthen this year the participation tables at all levels (municipal, departmental and national) on issues such as the inclusion of public policy of victims in territorial development plans, their participation in the methodology of territorial certification, the process of monitoring public policies of victims, and the strengthening of territorial entities in the formulation of projects aimed at the victim population.

“It is very important for us to work jointly, not only from the DGI and the entire Unit for Victims, but from the territory, always hand in hand with the participation tables, so that all the processes for the benefit of victims lead to reparation integral and to compensate for their rights”, said the Director.

Other topics were put on the table: bank of projects for participation, national forced disappearance meetings, antipersonnel mines, women and sexual violence; modification and extension of Law 1448 of 2011, reform of Participation Protocol, strengthening of participation and organized victims in Pdet municipalities, and Participaz mass training program.

For its part, the Executive Committee of the National Participation Board presented its main work bets for this year: modification of Victims Law, reform of the Protocol, legislative work with the Congress of the Republic (Commission monitoring the law 1448 2011) on issues within its competence, articulation with the Comprehensive System of Truth, Justice, Reparation and Non-Repetition, meetings with the local Bogotá participation tables and project management.

“This was a really important and inclusive exercise. Once again it is shown that dialogue is the best tool to overcome difficulties and to arrange all situations. We are very satisfied with this day. It was very fruitful and we moved towards work for the victims”, said Orlando Burgos, coordinator of the National Participation Board.

At the end of the work day, the Deputy Director General of the Victims Unit, Lorena Mesa, presented the socialization schedule for the draft amendment to Law 1448, so that it can be presented to Congress in March this year.