A day dedicated to the empowerment of girls globally

The Victims Unit is linked to the commemoration of the International Day of the Girl Child, promoting the recognition of their rights. 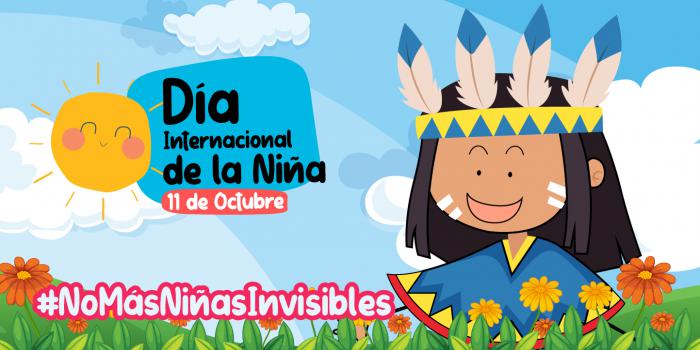 This October 11, according to the United Nations (UN), the International Day of the Girl is commemorated, to claim their rights for equality and against discrimination. To the evocation of this year is added the challenge of maintaining the fight towards leadership and the empowerment of adolescent girls and women who, in the framework of COVID-19 pandemic, have had to endure the widening of the technological gap and other associated problems.

The Victims Unit joins this world commemoration with the aim of making visible and dignifying girls and adolescents affected by the armed conflict, through the processes of care, assistance and comprehensive reparation.

The Unit has recognized within its registry platform, a number of 1.103.133 adolescent girls and women victims of armed conflict, as a mechanism for accessing the benefits granted by Law 1448 (Victims Law), in order to guarantee their integral reparation. Of these, some 44.758 have a fiduciary commission, a figure constituted as a measure of economic compensation for the damages caused, and 363.906 girls and adolescent women who are victims of conflict between the ages of 0 and 17 have benefited from humanitarian assistance together with their family group, as part of the management developed by the entity. In addition to the above, adolescent girls and women included in the Single Registry of Victims (RUV) have taken an active part in the symbolic actions, recognition acts and local memory initiatives carried out as a guarantee of immaterial reparation for the violent acts.

Within the psychosocial support process, 4.044 girls between 6 and 12 years old have participated in “Cre-Ser” strategy, 7.571 adolescent women between 13 and 17 years old have been linked to “Proyectándonos” initiative since 2016, and a number of 5.027 girls, boys and adolescents affected by the conflict have joined the measure of emotional recovery of the Victims Unit in alliance with the International Organization for Migration (IOM). Within the framework of this date, the Unit, in conjunction with the Plan Foundation, seeks to promote the “No more invisible girls” campaign, focused on the theme called “Connected and safe”, which aims to create awareness about the risks to lack of protection, abuse or harassment in digital media, and launch an assertive message against the proper use of virtual tools as an opportunity for girls and adolescents to learn, strengthen their leadership capacity and lead strategies for the promotion of equality of gender.

“We acknowledge the girls and adolescents who are in the Single Registry of Victims, mainly affected by forced displacement. We have been seeking psychosocial care, accompaniment in search of empowering effective and equitable participation throughout the national territory, so that these girls have the possibility of building their life project alongside their family, strengthening protective environments”, stated Ramón Rodríguez, director General of the Unit.

According to the United Nations Children's Fund UNICEF, “girls and boys perceive gender inequality in their homes and communities every day: in textbooks, in the media and among adults who care (…) Globally, almost 1 in 4 girls between the ages of 15 and 19 is unemployed and is not being educated or trained, compared to 1 in 10 boys. About 1 in 20 girls between the ages of 15 and 19 - about 13 million - has been the victim of forced sex.

Both in times of peace and in conflict situations, adolescent girls are at high risk of suffering gender-based violence”. For the Unit, this commemoration symbolizes a call to work with actions by girls free of violence, as agents of change in the face of the implementation of measures against discrimination and the lack of learning opportunities around the world.

The Unit for the Victims commemorates International LGBTI Citizenship Day