Choromando’s community collective reparation has 20 actions that will be applied in the next three years with productive projects, and the recovery of goods and traditions affected by the armed conflict. 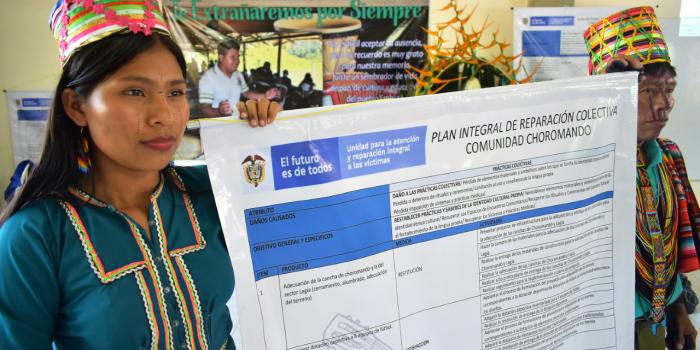 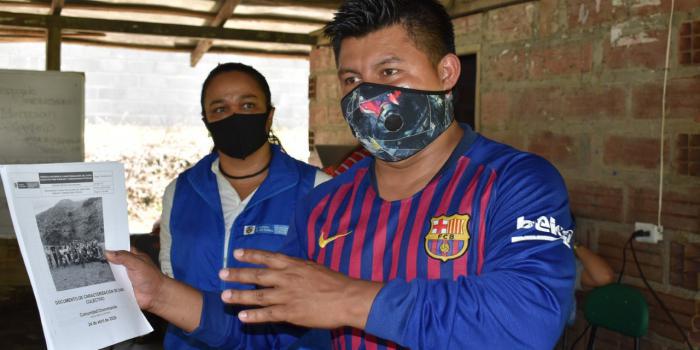 Due to the armed conflict, the Choromando people were in danger, which also jeopardized their ancestral territory and Embera culture. That is why they felt pain, joy, and hope when the Integral Collective Reparation Plan was being communicated to them in their own language to compensate for so many losses and destruction.

“The armed groups hurt us a lot. They killed important leaders, they made us flee from our ancestral lands, they looted our houses, and we lost our cocoa, banana and chontaduro crops, as well as our organization,” says leader and counselor Omar de Jesus Domico about the victimizing acts done by the FARC guerrillas and self-defense groups in this area of ​​the Monzhomando reservation, in Dabeiba.

Tribute to a leader

In this Antioquia municipality’s Indigenous council, almost a hundred indigenous people heard the measures of compensation, restitution, rehabilitation, satisfaction and guarantees of non-repetition in both Spanish and their own language, which were explained through 20 actions protocolized in the plan agreed with the Unit for the Victims and endorsed by the Interior Ministry.

They also participated in a harmonization ceremony and paid a posthumous tribute with traditional dance to the most recent violence victim: Socio Fernando Domico.

This social leader, murdered 20 days ago in Dabeiba, was remembered as the town’s joyful one, musician, educator and one of the managers, guide and translator among the community and entities officials in Choromando during all the plan phases.

His brother Omar de Jesús acknowledges: “He took the lead and organized all the information regarding what happened.  And as a teacher, he taught us and without him this plan would not have happened, and for that, we thank him. He is gone, but he left us a very well formulated project”.

During the characterization phase, the victims and collective damages that occurred since 1997 were identified due to bombings, selective assassinations of leaders, forced displacement, sexual violence, confinements, forced recruitment of minors, accidents with antipersonnel mines, among others.

Those difficult times were suffered by the former Choromando’s Governor, Berenice Domico. Between her childhood and teenage years “we all had to move to other municipalities because there were many armed groups. When we returned, everything was already destroyed; the animals and crops were gone and we had lost the houses, the schools, and the fields”.

Among the most important actions of the plan is a collective compensation for 270 million COP that, according to Berenice, will be invested in the purchase of land because "we want to expand our territory to live better with our families and recover traditional crops that we had before the armed conflict arrived, such as chontaduro, cocoa and banana, as well as the animals”.

She is also excited because "women are going to have a dressmaking workshop, and a self-government school to preserve our ancestral culture."

Recovering, preserving, and transmitting their traditions to new generations is a vital priority for the Choromando Indigenous people. The leader explains: "Because of the displacements and the armed groups we stopped wearing our clothes, body paint and we couldn't speak in our own language, because they believed we were planning against them."

The sports practices and scenarios will be dedicated in memory of Miguel Barrientos, one of the most remembered victims. This indigenous leader and sports fan was murdered by an illegal group and his dismembered body was thrown into the river that runs through the reserve.

For heinous crimes like this, another of the remedial actions will be the "jaure shareita" rituals, which work for the healing of sacred places such as hills, river sources and the cemetery. The guerrillas, the paramilitaries and the Army set up their camps and clashed near those sites.

According to the Unit for the Victims’ territorial director in Antioquia, Wilson Cordoba: “Choromando is the first community of the Embera Eyabida ethnic group in Antioquia that will implement a collective reparation plan in the next three years with a differential ethnic approach, all this to rebuild what they lost due to the actions of groups outside the law.”

In addition, he pointed out that "the entity will invest 3,500 million COP and aims to rebuild the social fabric and improve the living conditions of 320 indigenous people who live there."

The Victims Single Registry includes 522,659 indigenous people in Colombia and, of these, 453,354 participate in the different care and reparation processes of the Unit for the Victims.