These are the Unit for the Victims’ 2021 achievements

This Thursday, in an accountability exercise, the main 2021 entity’s achievements in terms of compensation, Humanitarian Aid, psychosocial care and actions for ethnic groups victims, among others, were presented. 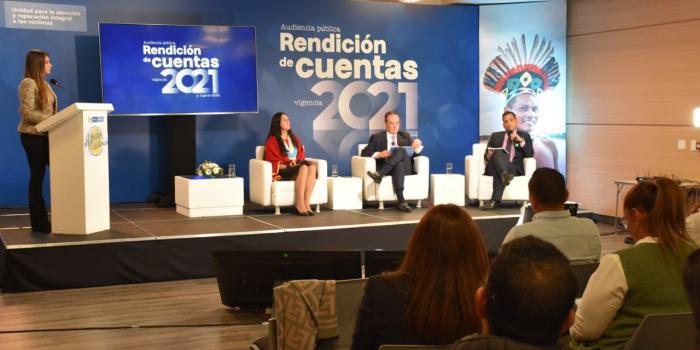 The entity’s Direction gave a positive balance of the work done through 2021 and part of 2022. This happened during the Public Accounts Report, which had the presence of victims’ spoke persons, international cooperators, control organisms and local authorities that work closely with the Unit.

Among the most important achievements, according to the Unit’s Director, Ramon Rodriguez, is the fact that, as of December 31st, 2021, 2,892,968 forced displacement victims had overcome their vulnerability, a figure above the four-year established period goal.

On the other hand, it is also worth noting the 2078 Law processing, which extended the Victims and Land Restitution Law for ten years, later sanctioned by the President, Ivan Duque.

Likewise, the execution of 97% of the annual budget stands out, which for the previous year was around 2.09 billion COP, that is, $2.04 billion COP. "Within that budget, we want to highlight that we made 116,910 compensation transfers, which benefited 107,527 people with an investment of more than 1.3 billion COP," he said.

“It is important to mention that, in the current Government, 365,515 victims were compensated with an investment of close to 3.5 billion pesos,'' according to the entity's director.

Other achievements included the following:

As the country’s main humanitarian institution, the Unit for the Victims has coordinated the attention of 157 massive emergencies in 123 forced displacements, 33 confinements and a terrorist act in 11 departments and 51 municipalities.

Within the framework of the prevention and concurrence process, the entity has supported municipalities with social and community infrastructure projects, as well as agricultural projects. In 2021, support was provided with construction materials and furnishing for 68 social and community infrastructure projects in 18 departments for a value close to 9,000 million COP, benefiting 38,860 people. The unit also delivered supplies and tools for 18 agricultural projects in 18 municipalities for a total value of 1,200 million COP.

During 2021, the Unit applied the emotional rehabilitation measure with 21,417 victims, of which 64% were women and 28% had an ethnic background, to contribute to the social and organizational fabric reconstruction, to rebuild and improve trust relationships to strengthen coexistence.

The "Tejiendonos" (Weaving) strategy was implemented with 57 communities as a group practices rehabilitation and recovery plan.

In addition, 11,627 victims were part of the Strengthening Capacities strategy from the rights approach, strengthening their skills and recognizing and dignifying their good name.

The victims’ return support contributed to them overcoming their vulnerability situation, ensuring attention in basic needs, health, education, housing, food, identification, and family reunification, among others.

During 2021, 5,132 households received support to ease family members and belongings transport to the settlement definitive places; 71 Return and Relocation Plans were approved.

Within these plans’ framework, 372 Special Community Support Schemes were delivered. Likewise, the Unit delivered Special Family Support Schemes to 2,500 households with business such as restaurants, cafeterias, shops, and hairdressers, among others.