The directors of the missionary areas of the Victims Unit heard the concerns of the delegates of the victims of Tolima. 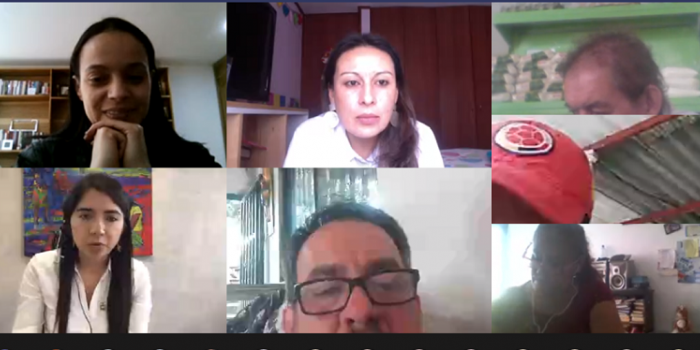 Director Ramón Rodríguez greeted the 29 departmental delegates from Tolima who participated in the “Great dialogue with victims in the time of Covid-19”, indicating that to guarantee the effective participation of victims, “the Unit will authorize the holding of a committee of Transitional Justice under the concurrence mechanism, to promote participation and follow-up of territorial action plans and boost the democratic exercise of victims”.

The director also specified that in complying with the peace accords, “the victimizers will give us 30 billion pesos. We are going to see how before the end of the year the s victims of Resolution 1049”, he added.

On the other hand, the deputy director Lorena Mesa began her intervention explaining that Law 1448 was extended until August 2031, thanks to a ruling by the Constitutional Court.

The deputy director also explained "that thanks to international cooperation we have obtained a support of four million dollars for the assistance, care and comprehensive reparation for victims".

Lorena Mesa invited victims of PDET municipalities in Tolima, Ataco, Planadas, Chaparral and Rioblanco, to participate in the “Participate with Legality” course on human rights and public policy for victims, to be held in August.

Regarding Eduardo Gómez's concerns about the compensation to the Roma people, which until now is very low, the deputy director indicated that according to the Government's commitment, "by August 2022, this entire population will be compensated".

So was the day

At two o'clock in the afternoon Luz Patricia Correa, director of Ethnic Affairs, began her intervention, who expressed the importance of characterizing ethnic communities in municipalities such as Ataco and Ibagué, and indicated that “in this department, we have advanced with 4 subjects of reparation ethnic collective”.

Aura Helena Acevedo, director of the Inter-institutional Management Directorate, reiterated that “the Unit continues its work of supporting the participation tables and from the Sub-Directorate of Territory Nation the guidelines with territorial entities for the concertation of Action Plans will be strengthened Territorial",

For his part, Héctor Gabriel Camelo, director of Humanitarian Social Management, stated that in the department of Tolima 6.342 money orders have been delivered for a value close to $ 3.950 million, adding that "these resources have reached the beneficiaries within the framework of pandemic".

On the question of José Tomás Suaza, delegate of Planadas, in front of the attention point of this municipality, the director of Social Management explained that “the points will only open when the national authorities issue the guarantees to reopen the attention in a massive way. However, we continue to serve with strategies such as telephone and virtual”.

Likewise, María Cristina Carreño, deputy director of Prevention and Emergency Attention, indicated that the unit supports the threatened victims and in these cases the protection route is activated and the Unit participates in spaces such as the Committee for Risk Assessment and Recommendation of Measures (Cerrem) and Preliminary Assessment Group (GVP).

Enrique Ardila, director of Repair, indicated that “in this department since the beginning of the health emergency by Covid19, we have already recognized 1.900 indemnities for a value exceeding $ 14.000 million as of June 20, 2020. Likewise, we have paid $ 276 million through fiduciary orders to 64 young victims, who have reached the age of majority”.

Ardila indicated that actions are being articulated for the delivery of the compensation letters with 472, Banco Agrario and also with local strategies developed by the Central territorial management

Finally, María José Dangond David, director of the Central Territory, stated that “the great challenge after listening to the delegates of the participation table is to continue working as we have been doing; even in this time of pandemic in which the Victims Unit has sought all strategies to reach the victim population of this department and the others that make up the territory" she said.