The National Effective Victims Participation Board’s Digital Ecosystem was officially introduced, a space for the empowerment of Board members and the population they represent. 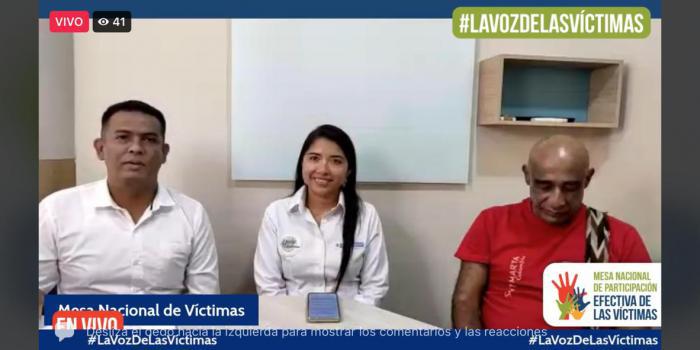 This deals with the digital takeover #LaVozDeLasVictimas, a National Effective Victims Participation Board’s Communications Committee’s initiative, a space and opportunity to offer victims and society information that contributes to the conflict victims’ dignity, as well as a commitment for the strengthening of communication, voices and the Board’s opinions impacts.

The digital dialogues promoted by the Unit for the Victims are part of this entity’s participation strategy with the conflict victims, and it allows interaction of collective listening and a conversation in the victims’ social networks for their rights vindication. Under this premise, a dialogue began with diverse opinions from different society sectors.

According to Lorena Mesa, the Unit for the Victims General Sub-director: “Listening spaces can be built through the guarantee of action without harm postulates, comprehensive reparation and differential approaches; that is, spaces that not only secure assertive communication, but also trust in the institution.”

The deputy director highlighted the importance of opening, supporting and building these spaces together with the victims and the institutions. Furthermore, she also pointed out: "They enable the entire population to understand the conflict victims’ experiences, this in order to strengthen actions we as the Government and from the Unit are taking in the face of the integral reparation at all levels for the victims."

She also referred to the importance of the spaces that come from the construction of truth and historical memory, as well as trust in the institutions. She noted these spaces should be brought together: “With affirmative actions in favor of the victims’ integral reparation, since listening spaces are created as a vehicle to know the needs, proposals and actions.”

Through the dialogue and opinions of different people, a discussion was held answering why it is important to open spaces to listen to conflict victims. In this regard, Jorge Mario Alvarez, the IOM’s Institutional Strengthening Program for Victims’ Adjunct Coordinator, pointed out that these spaces “allow to continue supporting and making visible actions undertaken by the National Effective Victims Participation Board, which promotes dialogue.”

La Voz de las Victimas, created with the support of USAID and implemented by the IOM, invites others to expand the victims voice as a new communication channel, as well as a process which helps closing the digital gap to bring information to all groups and territorial spaces.

According to Laura Borrero, a member of the National Board and a young conflict victims’ leader: “Listening spaces are important for everyone. Construction also starts from the spaces we can create. We have our channels so that information reaches our territory. There will be many spaces like these that are about dialogue with the territory. Spaces where we, the victims, take a hold of our voice.”

Ricardo Silva Romero, Colombian writer and journalist, was also one of the guests at the Digital Ecosystem presentation, along with Heriberto Sandoval, better known as Pacifico Cabrera, who joined in previous years in the Participaz strategy led by the conflict victims and the Unit for the Victims; both of them expressed the importance of disseminating the National Board’s work and listening to the victims and their leadership stories.

Esteban Trujillo Gaitan, a victim from abroad and member of the International Victims Forum, an organization that has representation in 23 countries, concluded by saying: “We must continue to strengthen the networks that already exist, starting by the youth network, so we can include them and gain from these new visions and generations that bring new learning. Of course, without ignoring the path of those who have been working for several years. We have to think about broad Public Policies that include everyone because the war affected us all.”

By the event’s closure, Wilson Quevedo, from the National Board’s Communications Committee, invited the general public to participate in all the Board’s digital spaces, stating these are for the victims within the territory.