With an act of recognition at Casa de Nariño, which was joined by the Victims Unit, the veteran victims of conflict participated in a symbolic act as a token of gratitude to those who gave their passion and dreams in the defense of Colombians. 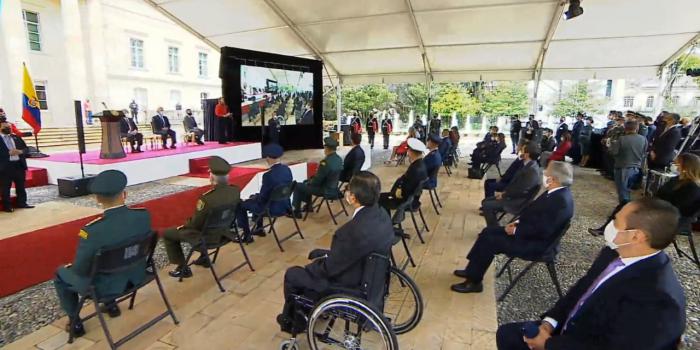 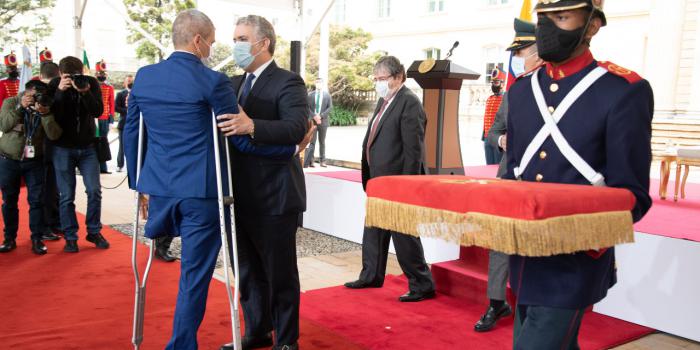 After the notes of the National Anthem, a minute of silence and a floral offering, an act of recognition and dignity was held for the veteran victims of the Public Force, which was held in Plaza de Armas of Casa de Nariño; The Victims Unit joined this event, led by President Iván Duque.

The activity was attended by the highest ranks of the public forces and those who risked their lives for the homeland, as well as the participation of the director of the Victims Unit, Ramón Rodríguez, who recently highlighted the courageous work of these men and women remembering joint work with other entities.

The director of the Unit said that “In the Unique Registry of Victims (RUV) we have approximately 19.500 victims from the different forces. We are promoting, with the Ministry of Defense, the purpose of facilitating that the taking of the statements are made, that the victims are included in the Registry and that they have technical support in front of those measures of attention, assistance and symbolic reparation, because they receive benefits through the Ministry of Defense to each of the forces”.

During the ceremony this Saturday, the Victims Unit presented a video, as an act of symbolic reparation within the framework of Law 1448 of 2011, which highlighted the testimonies of some veterans who told part of their story showing pride to wear a uniform, while highlighting the work of the entity in its process of recovery and healing of physical and emotional wounds.

During his speech, President Duque highlighted the pride he felt on this day: “I am honored to be the first President of Colombia to create Veteran's Day, the Veteran's Law, and honor all those who have served Colombia. It is done with affection, with conviction and with deep admiration”, he said.

Precisely, the director of the Unit, Ramón Rodríguez, carried out a symbolic act in which he gave 20 statuettes to veterans victims of violence, while highlighting the continuous work for their well-being. “We promoted this law that was born a year ago at the initiative of the president, to give recognition to those women and men who, in the performance of their duty, made a contribution. A victimizing event that affected their life, family environment and is the recognition and work that we have been doing between the Public Force and the Unit in matters of psychosocial care and technical support in the face of assistance and reparation measures that can be implemented”.

Within the framework of the commemoration of this Saturday, October 10, the Director recalled that the Victims Unit strengthens actions aimed at effectively contributing and achieving the objectives of national reconciliation, reestablishing the social relations among the communities that have been deteriorated by the armed conflict through inter-institutional articulation with the social policies of the State, offering alternatives for the restoration of their respective rights.

It should be remembered that the Victims Unit, the Ministry of Defense, the Military Forces and the National Police comply with the provisions described in the exchange of information and their respective technical documents established by mutual agreement, in order to provide complete and consistent with the date of attachment, withdrawal from the institution and belonging to the special regime at the time of the occurrence of the victimizing act.

It should be remembered that the Victims Unit, as coordinator of the National System of Attention and Comprehensive Reparation for Victims (SNARIV), advances the articulation of the offer with the SNARIV entities, in order to guarantee that the entities have a targeted offer to those members of the Public Force who are victims.