Rosero family, an example of overcoming and resilience

Jairo and his family collected the compensation money that the Victims Unit gave them and thus managed to start a family business, with which they currently support themselves. 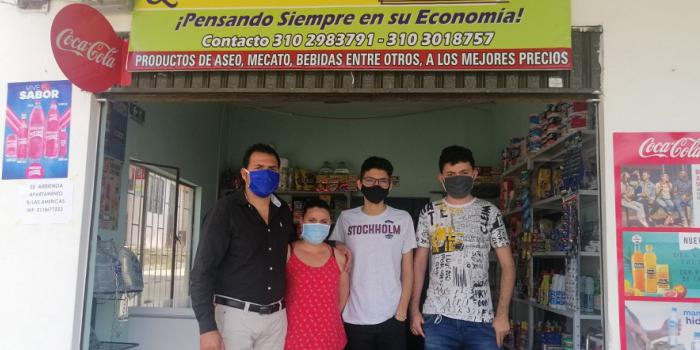 The violence and the roar of the bullets took the lives of several of his friends and acquaintances, but nothing could overshadow his courage and his desire to get ahead.

Jairo Ancízar Rosero, peasant de birth, dedicated to agricultural work by conviction and a financial administrator by profession, he fled his native Puerto Guzmán (Putumayo) in 2002.

From a young age he ventured into politics, he became a councilor when he was barely 20 years old, but his ideals went against the leaders of the illegal groups that roamed the municipality at that time. "We councilors were persecuted by the situation of the fight against corruption, I saw my life and that of my family threatened and for this reason I made the decision to resign and go to the city of Mocoa to find a new space and a new horizon for my family; Thank God things have worked for us, we have moved forward with our lives and that of our children”.

He believes that life has great things destined for them, he assures that he is telling the miracle story because when he had a revolver pointed at him, he saw his whole life pass through his mind in a matter of seconds. “In case I had been absent or something had happened to me, the issue would have been more difficult for raising children. Thank God we are telling our story, other friends were fatalities, they stayed in that space and lost their lives, so the situation was not so easy, the armed actors had control of the area, today there are police and there is presence military, but at that time the story was different", he recalls with nostalgia.

However, the road to get to where they are now was not easy. The difficult moments they lived come to their memory because no one wanted to receive them for being displaced. Finally, and after finding a refuge, it was time to search for survival every day, they needed to raise their young children who were only 1 and 3 years old at that time and who today, almost 20 years later, are already university students. "It is difficult to leave the countryside where you have everything to a city where you practically have to earn a living from day to day, also the culture because in the countryside our parents teach us to work and in the city our children have to teach our so that in the same way they have to study”, he assures.

Neither Jairo nor his family knew at that time the rights they had because they had been displaced by the violence and after several years of living in the capital of Putumayo they decided to tell their story and request compensation, as a measure of reparation granted by the Colombian State to through the Victims Unit to those who have been affected by the armed conflict. “At this time we decided to place a business with the help that the Victims Unit gave us, the compensation came at the best time and it was a blessing because I had decided not to claim compensation until all my children could decide. So we raised a little capital to put up this business which we are enjoying today, the whole family is working and we are benefiting from it”, he emphasizes with the enthusiasm and positivism that characterizes him, despite the difficult times he had to go through.

This man, natural son of Puerto Guzmán and adoptive of Mocoa, wants his case to be an example for other people who like him receive their compensation: “Let them remember that they must make good use of resources and that poverty is sometimes on our mind, We should not just wait for state aid; We must try to see the way in which we move forward with our family, our children, regardless of that support, I really did not expect that help and because thank God it came at the best time, but if it had not been like that, otherwise we would be working and getting ahead”.

So far this year 2020, the Putumayo Territorial Directorate of the Victims Unit has delivered 1.846 money orders for compensation and trust orders throughout nine municipalities.