The race against war that crosses borders

Anibal Ocampo walks a path that lets him dream with a peaceful Colombia, because violence didn’t end his goals. He is an Antioquia’s man who fights day by day for the conflict victims’ rights abroad. 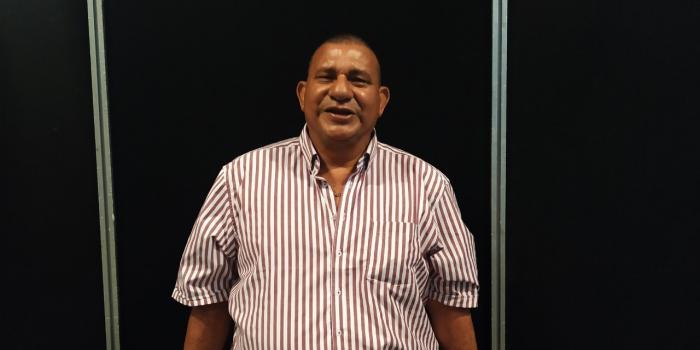 Anibal Antonio Ocampo comes from a Remolino Grande, as Puerto Colombia municipality was known, in Antioquia, a peaceful town where he was born along with his three brothers. He left this place with his family to Puerto Berrio looking for better opportunities.

Life would take away the privilege of seeing his mother's smile every day. He became an orphan while still a child and without the possibility of knowing his father, but his grandparents’ arms would try to make up for those harsh absences, leading him along a way of kindness.

“I used to be an athlete. At a sports level, I was very outstanding at school and at the departmental level. I was in several Olympic local games representing Puerto Berrio. I got to know many places in the country such as Medellin, Segovia, Bogota where they held national games”, recalls Anibal with a smile that transports him to his childhood.

“When you lose a competition, you don’t lose entirely, what happens is you learn more things to overcome. Overcoming is not losing, it is learning”, he explains, closing his fist as a sign of victory. He learned that lesson very young at the age of 15 when he discovered his talent for athletics and, without knowing it, he would have to maintain that premise: "Learn to overcome" a fall or a loss and learn which obstacles life would test him.

Just before his 18th birthday, he made the mandatory military service interrupting his studies. “When I left the service in 1982, the armed groups offered me to go with them to be a part of violence and all those things. I refused because I came from suffering, I didn't want to continue, I wanted to improve myself in my job, I wanted to work in a company, have a quieter life and, on the contrary, life was getting more complicated every day," he recalls.

“That was when I began to move around some Antioquian municipalities. Life was changing fast. I spent some time in Segovia, and there I lost one of my brothers; I still don’t know what happened to him,” Anibal refers to one of his younger brothers, Ruperto Antonio Ocampo, who was under his care.

“Because of the clashes between the guerrillas, paramilitaries and the government in the armed conflict, in Segovia there were about 43 dead and 52 wounded, and that affected me a lot psychologically; I had to vacate the town the next day and I had to flee on a bus to Medellin”, he recalls with melancholy. He started a race to prevent him from being the next on the list, as it had already been announced in 88.

This big man with a thick voice reveals a heart saddened by the fact that "one feels forced to flee because one leaves the warmth of their parents and the family, and not having anyone, that is very hard."

In 1992, when Anibal had already traveled several kilometers in Colombia, he managed to reach Costa Rica with a suitcase full of nostalgia, longing, and fear of repeating the history that caused him so many falls.

“I liked Costa Rica because there is no Army, and by not having one, it has a lot of education and progress, it is a country that cares for youth and people in their old age. I started my life very differently there; today I am grateful because I ended up as a victims’ leader”, he affirms with a more hopeful tone because “I had already completed part of the university. What is the university? What you learn in the street, which is the true university, because what you learn in the street you must use, not with drugs, violence, or crimes, you just apply discipline and keep going”, he replies with a firm voice and head held high.

Working honestly and showing Costa Ricans that hard-working Colombians are more, with that he managed to be welcomed as another son of that beautiful country, and that is how they allowed him to work as a street vendor.

“Wherever I arrived, I heard Colombians speaking, and we talked about our experiences. When I asked why they were here and they told me: because of the war, because of the forced displacement.” It was then that he took the initiative to organize and find a way to join forces to fight for the victims’ rights.

Insecurity was hitting them hard in the neighborhood, and Anibal presented a security plan to the community, but the fear of achieving peace was strong in his fellow neighbors. “Don't worry about the money. With will power, character and the Lord’s blessing, I’m going to get the work done, we don't need weapons. That's how security was set up. Today this endeavor has been going on for 25 years, and it has worked fine because we have a camera system,” he says.

That leadership led him to be chosen as one of the victim’s representatives abroad for Costa Rica, where he has been able to help almost 2,000 people who have experienced similar situations and who live away from their homeland. “When they call me from the embassies, they tell me: we recognize the work you have been doing for the victims. I like working for the victims because if you work for a community by yourself, you don't get anything done, it has to be a group effort.”

Just like him, every Colombian fights and works to give their best and achieve their dreams. Closing his eyes, Anibal doesn’t hesitate to mention: “My dream would be to see Colombia without guerrillas. If I could, I would write a book with that title, explaining why we need a country in peace. Colombia is rich in everything, and I know that the compatriots who are in another country will arrive in our land in time”.

In this way, looking at the horizon with a smile that lights up his face, and with that nobility that surpasses any understanding, even more so when he has experienced war, he wants to prove that people can heal pain that stays in the soul:

“Sometimes one thinks: the damaged, there’s no way to go on, but that's just criticism. Things can be repaired and fixed again. That's moving on because obstacles are good too. If there is no criticism, there is no progress, but you must improve yourself in many things because Colombia has a lot to offer.”