An LGBTI victim leader’s example, a lawyer and businesswoman

On the International Day Against Homophobia, Transphobia and Biphobia, this is the profile of an LGBTI leader who survived the armed conflict and owns a business that offers “viche” products, an ancestral drink from Afro-Pacific communities’ heritage. 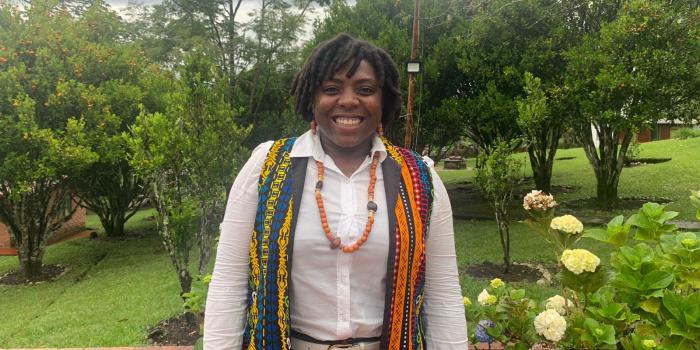 By Cesar A. Marin

Daniela Ordoñez remembers that since she was eleven years old, when she lived in Villa Rica (Cauca), she felt attraction toward girls and boys. She often wondered why she was equally attracted to both sexes. "It was like I questioned myself since I liked people of the same sex," she says.

“I felt like I liked men, but I also had some attraction to women. I even had a couple of boyfriends and, being with the second one, I was also seeing a girl. Being with him was surely a way to cover up what I felt about girls,” she reflects.

Her identity was something she became aware of early in life. Born in Cali, raised in Cauca, she remembers that, at the age of seven, her mother gave her a black doll, which she still has. That was something that reinforced her own understanding about the fact she was a black girl.

She grew up with her mother, the head of the family, a nursing assistant at the Universidad del Valle’s Hospital, who she considers a giving woman who instilled many values upon her. It was always just the two of them, which meant struggles and teachings about parenting and responsibility.

Up to third grade, Daniela studied in Villa Rica. Later she finished high school, in Jamundi (Valle), 15 minutes away.

In 2012, when she was about 17, she realized she liked women more than men, and then she told her mom. At school, she felt some homophobia. “I had another friend I hung out with, she was also a lesbian, but we were just friends. Later I had a partner with who I fell in love with when I was finishing school.”

The car bomb in her neighborhood

Just in the week that Daniela entered Universidad San Buenaventura, in Cali, a car bomb exploded in Villa Rica. Days before there was a noticeable calm, or at least the kind of calm to which Colombian society has become used to during the conflict. "It was said there were armed groups and threats against the Police posts in the municipalities, but nothing else than rumors."

“On February 2nd, 2012, I was at the induction week. I had a motorcycle and I left class at noon, I picked up mom like every day and we went to Villa Rica. She knew about the attack that morning and hadn't told me about the car bomb."

As she entered the town she felt a strange sensation, like desolation that filled her heart. When they arrived at the park, Nubelly told her that a car bomb had been activated at the Police station that morning. Six people died and 20 were injured. Among the dead was Nidia Alejandra, her childhood friend. “I was emotionally unbalanced, people had to help me. When I got home, 30 meters from the station, everything was destroyed, including the neighbors' homes."

The death of her 18-year-old neighbor, Nidia, hit Daniela deeply. “We talked from our yards. She died because a glass shard pierced her heart due to the explosion. Today I wonder what would have happened to us if we had been home. I think that God helped us both by being in Cali: my mother working in the hospital and me at the university.”

Losing her friend and seeing her house and neighborhood practically destroyed changed her life. Daniela feels she was never the same both psychologically and emotionally. “I have never felt the kind of peace of mind that I had before.”

Arriving at the Victims Effective Participation Board

In 2019, Daniela graduated as a lawyer. From a very young age she worked in youth population and black community participation and leadership spaces. She defines herself as a territory life and human rights defender.

She believes this leadership is partly inherited, although she has also been working hard on it. “My mom had a lot of influence on that, she was a pioneer for Villa Rica to be a municipality. Since I was three years old, I went to those meetings, and I have photos of me playing the drum as a little girl. In fact, nowadays politics is one of the things I like.”

In this regard, she believes both the law and the Unit for the Victims have been useful for people affected by the armed conflict, but it hasn’t been enough. She considers there’s a need for more resources, as well as a stricter regime in the participation boards, so there could be less focus on personal interests, and more attention to real work in the territory.

Daniela doesn’t stand out only for her leadership, she also can undertake in business ventures. Almost four years ago, along with a friend, they set up a “viche” business, a native sugar cane fermented drink produced by artisanal distillation without chemicals.

“The “viche” has always been in the communities, it is an artisanal drink from the Pacific communities, and I fell in love with it. Besides preserving cultural practices, we want to build a network where women may market and produce these drinks. And this will also give power and economic independence to Pacific women.

Right now, I'm not a producer, but a transformer. The “viche” producer is the one who distills it in a still for cane. I buy the “viche” from the people in Nariño or Cauca’s north, who also distill it.”

Once the business partnership is over, Daniela is the sole owner of the Menelik Pacific company. She transforms the “viche” on the first floor of her house in Villa Rica. She sells the “curao”, made from medicinal herbs; “la crema”, which is an appetizer; and the pure “viche”, craft distilled from sugar cane. "They are aphrodisiacs, and, in addition, “la crema” is very useful for the brain, for memory," she says proudly. Currently, the company ships to most of the country, but mainly to Cali, Bogota and Choco. "This is an artisanal and ancestral power that we have, and the idea is that anyone can enjoy the drink."

Daniela is tireless. She has a post graduate degree in Education, Culture and Politics from the Universidad Nacional Abierta y a Distancia (UNAD), and she is currently studying a master's degree in Management and Audiovisual Cultural Production at the Universidad Jorge Tadeo Lozano in Bogota, thanks to the support of the Manos Visibles corporation and the Ford Foundation. “There were 100 people that answered the call, then they pre-selected 50; then we did a diploma for four months and finally we were 32 selected”, she says with some vanity, and adds that she litigates in administrative and constitutional law and provides services as a lawyer in the Secretaría de Desarrollo Social del Cauca.

Ten years have passed since a car bomb shook the foundations of her life. Today, in the company of her mother Nubelly, Daniela looks to the future head-on thanks to her drive to do business and her leadership strength.