Daniela, a young woman with a heart focused on social causes and family

Thanks to the Higher Education Access and Permanence Fund, this young woman form Quindio is finishing her medical studies. 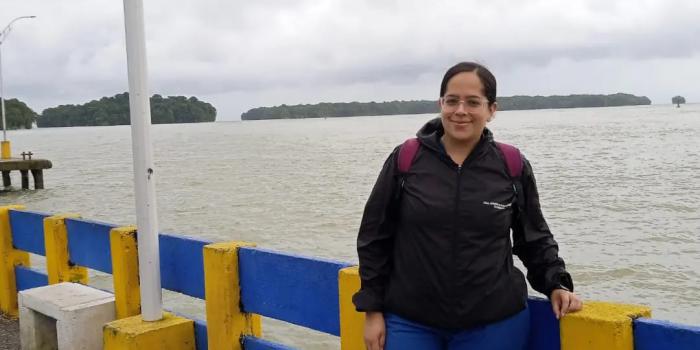 She doesn't remember much when it all happened. It’s her defense mechanism. However, she knows the event left quite an imprint. Despite this defense system, some facts couldn’t be blocked: the town's power outages every so often, especially at night; the people’s cries; the eagerness to hide somewhere, to get home; the calls from her mom asking if they knew where her daughter was, the answers saying she was leaving her aunt's house. The fear came because of the FARC’s 5th Front, which besieged Pijao, a small municipality in Quindio around 2001.

Her mother was a manager at Bancafe. Her father drove ambulances. Due to her position in the bank, her mother had to pay so neither her children nor her husband would need the ambulance. Because of the guerrilla, they had two emergencies: the first forced them to move to Montenegro, near Pijao; the second one, led them to Argentina.

The first time, in October 2001, it happened when more than 200 guerrilla members took Pijao. Afterwards, they spent four years In Montenegro. There, her mother worked at a Bancafe branch until the bank stopped working. Without their main support, which came from her mother, they had to return to Pijao to their grandmother's house. Her grandmother’s warmth proved that where there’s food for two, there’s also food for six. In addition, despite the nightmares, all her relatives were there.

The second time came in 2010. For reasons this story’s main character still doesn’t understand, they went to Patagonia, Neuquen, a city that according to her memories is around Manizales same size. They arrived only with their clothes on, because her mother sold everything they owned to buy tickets. They had to change coffee for “yerba mate”, but they never got used to its bitter taste. For the first time, both parents worked in the same company.

Continuing her education wasn’t a problem since this is free in the tango’s country. She enrolled in tenth grade and her younger brother in sixth. There, they realized Colombia’s education and health systems aren’t as bad as people think, or at least, that they work better than in Argentina.

After six months they returned because her father almost died. Sugar problems became an issue because when they fled Colombia, he didn´t take his diabetes medication. The diagnosis meant he had to return to Colombia and continue his treatment.

They went back, but this time to Armenia, where one of her uncles lived. For several months, her parents couldn't get a job until her mother signed an indefinite-term contract in Quindio’s capital and her father returned to turn on the sirens.

Worries weren’t as frequent. She finished high school but getting in the university to study medicine had its drawbacks. There were several failed attempts. "The fact we moved to another country and another education frame affected my ICFES[1] test." She wasn’t accepted in public universities. Then, she attended a premedical course to alleviate deficiencies. At the end of it, her family worked hard to gather the money for a private university, hoping she could also apply to Icetex[2], but they discovered the place the chose didn’t have an agreement with the loan entity.

With a neurosurgeon’s calm, she had to wait until next semester to enroll. She was on her second semester when they opened the open call for the Fund for Access and Permanence in Higher Education. That was how she had better chances of doing the Hippocratic oath.

“At the University, I began to do social work with some health brigades with the Army. I was also in the third brigade, the Navy’s "Navigating the Pacific’s Heart"; I traveled the southwestern Colombian Pacific coast for 15 days with them. Then, they told me there was a vacant at the Bahia Malaga naval base.”

The possibility of doing her rural practice year in a place other than her beloved Quindio’s land wasn’t so attractive, mainly because she had never been apart from her family. But the favorable security conditions and the experience gained in the health brigades with the Public Force tipped the balance.

At first it was hard for her, but today she is happy in Bahia Malaga. Recently she had to attend a birth in a small boat. Armed with a field kit, like the ones war nurses carry, gloves and suture equipment. That’s her job’s nature: to treat people who arrive by boat or through the brigades, to help patients who "walk four or six hours for a medical appointment."

In these brigades she learned most frequent health conditions of this sector’s population are skin lesions and vaginal infections. "Because the water isn’t potable. They take it from the river, or they bathe there." According to her experience, these problems are especially suffered by people who live near the Guapi River.

At 26, the Hippocratic oath awaits her, and she wants to be an obstetrician-gynecologist or a surgeon, although she also longs to do more health brigades and return to her land with the joy of being able to help her parents, who have already retired. "I don't want to leave their side. I still have many things to do for them." This is Daniela Gonzalez, a doctor who, if ever had a medical evaluation done to her, it would say without needing a second opinion: “She has a heart focused on social causes and family.”

[1] The GED equivalent exam in Colombia.

[2] This is a Colombian Government institution which gives student loans.