In the framework of the International Day for the Elimination of Sexual Violence in Conflicts, the Unit for the Victims intensified efforts to protect the more than 31 thousand direct victims of these crimes. 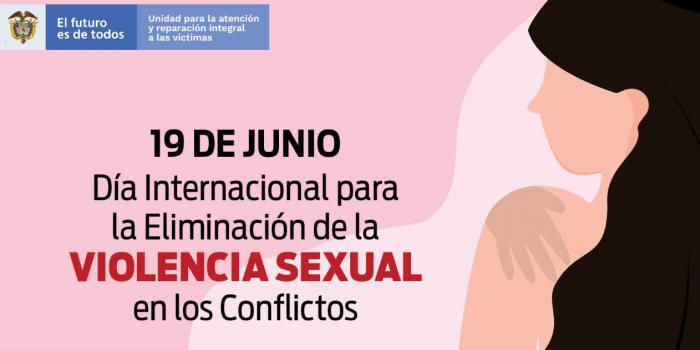 On the occasion of this commemoration, the Unit for the Victims restates its commitment to honor the victims and survivors of sexual violence in the context of conflicts by promoting prevention, protection, reparation and non-repetition guarantees in accordance with the Law.

The General Assembly of the UN declared June 19th as a reminder for these events and, in that sense, the Unit joins the commemorative events, highlighting all the psychosocial exercises aimed at emotional recovery. The Unit also applies different strategies of comprehensive reparation with a gender perspective for crimes against sexual freedom and integrity.

This is how 2011’s 1448 Law of recognizes different crimes against sexual freedom and integrity such as forced abortion, forced contraception, forced exploitation, human trafficking, sexual abuse, forced pregnancy, forced planning, child pornography, violent carnal access and sexual slavery, which constitutes a serious violation of human rights and causes both physical and emotional damage to the victims.

According to the Single Victims Registry, there are currently 31,495 direct victims of crimes against sexual freedom and integrity, of which 92.58% are women, 5.81% are men, and 1.61% are Diverse Sexual Orientations and Gender Identities Population (OSIGD in its Spanish acronym), 13.34% have some disability, 26.79% have an ethnic belonging and 77.87% are between 29 and 60 years old.

Now, it cannot be ignored that each of the aforementioned typologies have personal, family, social and community repercussions, hence the constant integral work with each and every one of the people affected by this scourge.

When looking at crimes against freedom and sexual integrity events by year, 2002 was the one with the highest incidence, as it reported 8.46% of all events. Likewise, it was determined that 42.01% happened between 2000 and 2005.

Regarding individual reparation, the entity confirms that 8,964 administrative and judicial wire transfers have been made for compensation, which have benefited 8,350 victims of crimes against sexual freedom and integrity. The amount of these compensations is equivalent to $179,251,702,302 COP; of the compensated victims total, 94.91% are women, 4.06% men, 0.29% OSIGD population and 0.74% did not report their gender.

On the other hand, 5 Collective Reparation Subjects (SRC in its Spanish acronym) have been identified in the framework of this victimizing act: Peasant and Indigenous Zulia Women Association (AMUCI EL ZULIA), Afro Women for Peace Association (Afromupaz), Pueblo Betoy and Anmucic Nacional, among others.

The Unit for the Victims has delivered 788 wire transfers of Humanitarian Aid due to affectation with an investment of $1,172,111,320 COP to sexual violence women victims; 20.09% of these were delivered during 2018.

Regarding inter-institutional and participation actions, the entity confirms that, currently, 64 sexual violence victims are part of the Participation Boards and there are two representatives in the National Victims Participation Board. It should be remembered that during March 3rd, 4th and 5th, 2021, the Sexual Violence Delegates National Meeting called "Painting the inclusion of colors" was held in Monteria, with the participation of 44 victims, of whom 13 did it virtually.

This is how the Unit for the Victims continues to work on the construction of the Public Policy for Integral Attention to Sexual Violence Victims and the children of the act.

Conflict victims, the central axis on the International Day of Peace