For 29 years, Emilia Velasquez has searched for her husband, brother and a brother-in-law’s bodies, who were murdered and disappeared in southern Tolima. Her life symbolizes the pain and anguish of more than 185 thousand victims of enforced disappearance. 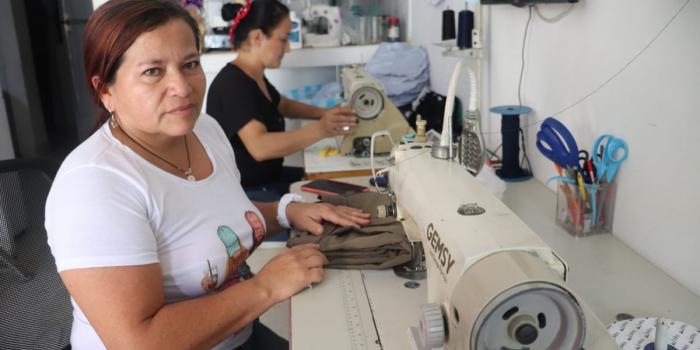 In 1991 a new Constitution was released in Colombia, which established a broad chapter on Human Rights. Paradoxically, on August 26th of that same year, just 52 days after the Magna Carta was promulgated, Emilia Velasquez and her family faced the worst case of rights violation as citizens and human beings.

The news were confusing. A massacre of peasants in San Jose de las Hermosas was announced in the local media, this is one of the five townships of Chaparral in southern Tolima, nestled between two thick and large mountains that surrender to the flow force of the Amoya and Davis rivers. A natural paradise, but for many years, it was also the operation center of the extinct FARC guerilla’s Front 21st.

On Sunday night of that August 26th, Ever Devia, Emilia's husband, shared a few drinks with his brother Ovidio and Lucas Velasquez, his brother-in-law, Emilia's brother. At dawn, they went to La Linda farm to rest, their place of work for five months. Perhaps they hadn’t fallen asleep when a guerilla group rifle bursts hit the house and everyone who moved inside it.

“My brother-in-law Ovidio was the first to fall, and his wife Marleny Echeverry was shot twice when she tried to help him. She bled to death. They murdered my husband and my brother when they tried to run,” says Emilia.

Only four children and one woman were saved. No one knew exactly how many victims were. Silence, as was the custom in these areas, also became an accomplice.

"The only thing the Police and the Army told my father-in-law was that they’d killed them all," she recalls.

By ambiguous versions, Emilia, who on this date was in an Armenia’s hospital after giving birth to Luis Felipe, her second son with Ever, learned that her relatives had been buried in a common grave three days after the massacre.

"They say it was a dry lake, a swimming pool next to the Police Station and that the town people helped to cover them," she points out.

Only two years after what happened, Emilia and Lucas's mother was able to enter the village. Since then, finding the bodies has turned into an agonizing and eternal duel.

The area was ruled by the guerrilla and, for the authorities, it was just one more case that would end up filed in a short time. "They even linked them to an illegal armed group called Ata Rojo," she says.

They felt revictimized. The pain was greater, and the search also became a struggle to regain their relatives’ honor. "Who else if not us knew who they were, if they had been criminals, they wouldn’t have been there with children."

Time passed and, in the midst of stigmatization, the lack of support from the entities and fear, only until 2008 a first complaint was filed, and from then on, the case was closed four times. “They told us they closed it because it was inhibitory since no one had claimed the event’s responsibility,” she recalls.

On the verge of giving up and exhausted, in 2011 they went to the newly created Unit for the Victims. Emilia assures it was in this entity that the State’s hand started to be on her side: “They assisted me very quickly, I was very lucky. In less than six months they compensated me, but they have also always provided us with psychosocial aid, as well as support in the search process,” she acknowledges.

Between 2019 and 2020, and after the process was reactivated, the hopes of being able to get closure came again. In these two years, a prosecutor ordered a search, first under San Jose de las Hermosas’ school’s foundation, and then there was a second attempt in a nearby yard; both proceedings didn’t yield results.

In 2021, the forensic team returned. This time, the prospecting process had a geo-radar to take graphic images from the inner soil, a technological aid where all the family hopes were placed. However, and although a three-meter excavation was carried out at the educational institution dining room, no evidence of the remains was found either. The prosecutor and anthropologist versions are that the bodies could have been damaged by the surrounding soil. They said the General Attorney’s Office wouldn’t take part on another search, and they will give us a death certificate saying they are dead," she says.

She says that along with her family, they understand and appreciate the General Attorney’s Office work, and even though they have thought to give up the search, for her, there is an imprescriptible mourning as it is the crime: "For me, they are still missing."

Subjected to a continuous and permanent crime, enforced disappearance left an unforgettable suffering mark on Emilia. A bitterness that has only found joy thanks to her four children’s love: Walter Steven, Luis Felipe, Jennifer and Luisa Fernanda. With them, and with the financial reparation provided by the Unit for the Victims, 10 years ago she bought a house and started the clothing company “Subl & confe”.

“We’ve been doing pretty well because I work with my two daughters and we create jobs for other people. We do custom sublimation on glasses, t-shirts and caps. Furthermore, we make uniforms, and in this pandemic, we had to reactivate by making masks,” she says.

But she is not only an entrepreneur. Emilia also fights for the conflict victims’ rights through her corporation Famdesvul. "We have more than 60 vulnerable families, and we work for them to find jobs, housing programs, education access and everything we can to improve their lives.”

That work and resilience capacity made Emilia understand her life could be a pattern for others to follow. That is why, in the midst of her pain, but also with her tenacity, she decided to tell her story for the first time and pay tribute to the 185,843 victims of enforced disappearance who, like her, are struggling in Colombia to find their loved ones and consummate their mourning.

“I tell all of them not to give up, to insist, to continue looking for their relatives. And to the perpetrators, to think of the people, to think about them and their families,” she concluded.

To keep in mind

Enforced disappearance is a criminal offense prohibited by 2000’s 589 Law, contained in the Colombian Penal Code’s 165 article. It is an imprescriptible crime, which means the crime and the criminal action derived from it doesn’t disappear over time.

Conflict victims, the central axis on the International Day of Peace