The victim who received compensation at a clinic

The Unit for Victims in Tolima delivered a compensation to an elderly person from Ataco, who had been hospitalized for more than 15 days 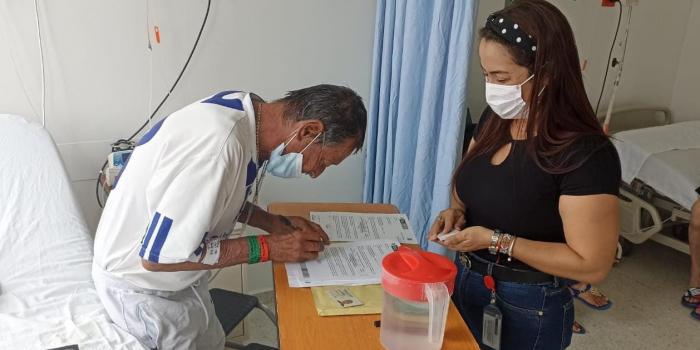 Luis Meneses, 69, was summoned to the Unit’s event held on September 2nd in Ibague to receive his compensation letter. However, his health condition worsened due to a respiratory failure, for which he was sent from Ataco to the Nuestra Clinic in the Tolima capital.

Under these conditions, it was impossible for Luis to receive his notification letter, which he agreed to because he was included in the collective return and reparation plan for the Canoa La Vaga de Ataco village. In solidarity, leaders of the municipality Victims' Participation Board presented the case before the Unit and requested that, due to his difficult economic and health conditions, his compensation measure could be delivered at the medical center where he was.

The request was answered and, in response, professionals from the Central Territorial Direction went to room 415 A of the clinic on September 9th to deliver the check letter.

“I worked all my life in construction and, unfortunately, I smoked a lot; the cigarette and the cement finished off my lungs, and now I can't work, I have to be connected to these devices so I can breathe well and try to move forward with this treatment,” he said.

He is a victim of forced displacement, he does not have his own home and, for ten years, he has lived with a woman who has advanced visual limitations. “I couldn't have children. I have two older brothers that I never heard from again. We are living in a friend’s house who helped us. We try to survive selling eggs, chickens and some food that grows in the fields, in that area,” he added.

"I am very grateful to the Unit for the Victims, I receive this as a gift from heaven," said Meneses.

“According to the Victims Law, elder people over 68 with serious, ruinous illnesses or in a disability condition, must be prioritized to receive financial compensation. In the case of Mr. Meneses, it is quite satisfactory, not only to comply with the regulations, but also to provide the means and bring our entity’s services closer to the victims and accomplish an effective measure,” said Maria Dangond, the Unit for the Victims’ Director in the Central Territorial Direction.