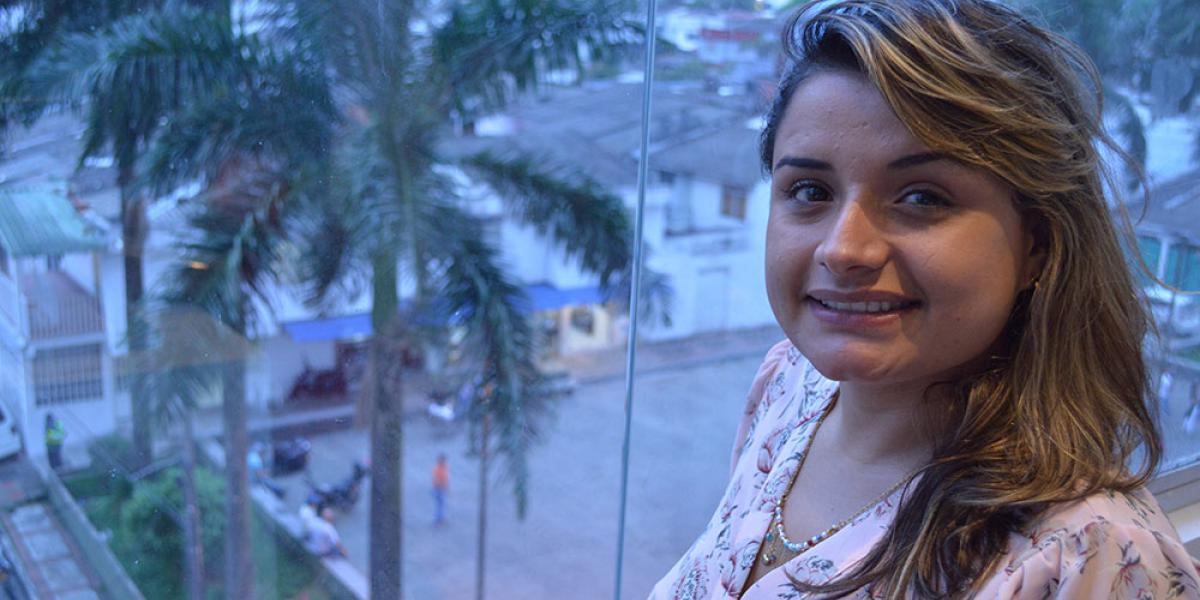 Ana Yeimy Acevedo Arredondo is a medium height brunnette with fine features and a strong character. She was born in 1992 in Montenegro (Quindío). As a child, she became accustomed to traveling from one place to the other in the hands of her mother and her three sisters who worked trading comercially in the southern areas of the country.

"My mother, who was head of the household, sold all kinds of things; pots, clothes, accessories, knick-knacks and general elements that because of the distances among populated areas, those  products sold well in these villages" remembers Yeimy.

They have been living in this region for 23 years. Its main activity hub is located in the area of Caruru with a population of just over 3 thousand inhabitants that stands out as a dense area of Amazonian forest, with temperatures of more than 30 degrees on cool days.

Her family experienced the forced disappearance of her stepfather and she was sexually abused by armed illegal groups who arrived at her home when she was 15 years old.

This event scarred Yeimy and her family for life, but despite all this suffering, she still managed to survive the dynamics of the conflict that this area experienced back then.

"In 2013 I started working for the police inspection in Carurú for two years. Then, I resigned and started one of the most important stages of my life. In that job I met some women who dared (in a timid way, and with a lot of fear) to report cases of sexual abuse, mistreatment and rights violations perpetuated by armed groups in this area. From my experience, I started without knowing how to arrange activities such as workshops, meetings but little by little we created an organization of women victims" she says.

The OMUVI organization, which she founded several years ago, works with more than 20 women who, breaking the barriers of silence have accepted the violent acts suffered and are slowly trying to overcome them with the permanent support of the psychosocial team of the Victims Unit.

She also says that there is a lot of sexism, especially in this southern area of the country, which gets in the way of women fighting for their rights.

"It's still not easy for me to talk about what I experienced. It causes a lump in my throat. However, I had to learn to coexist with the groups who hurt me for a while. Later on I found out that they had died. I did not feel pleasure, on the contrary, I felt that with their death my opportunity to forgive these people was absolutely gone. I am satisfied with harvesting peace and forgiveness every day in my heart, for my daughter and for the women I work with day by day.”

Her inspiration is a 5 year old, who sees her working every day for the victim´s population. Each night while seeing her as they rest, she remains even more convinced that what she does is worthwhile for the future of those generations that should not repeat the pain and suffering previously experienced.

"Many women are ashamed to tell their stories and assume that their dignity was taken away. But what we are looking for is for them to lose their fear, to believe in themselves and adopt (with the support of those who are at their side), the possibility of gradually recovering their value as women “.

Education is the foundation of their work strategy, considering that if everyone knows their rights and duties it will be easier to advance in any peace and reconciliation process held in the territories along with the recognition of the truth and non-repetition guarantees.

"If we all have access to training processes, many social problems in the country will be reduced," she says.