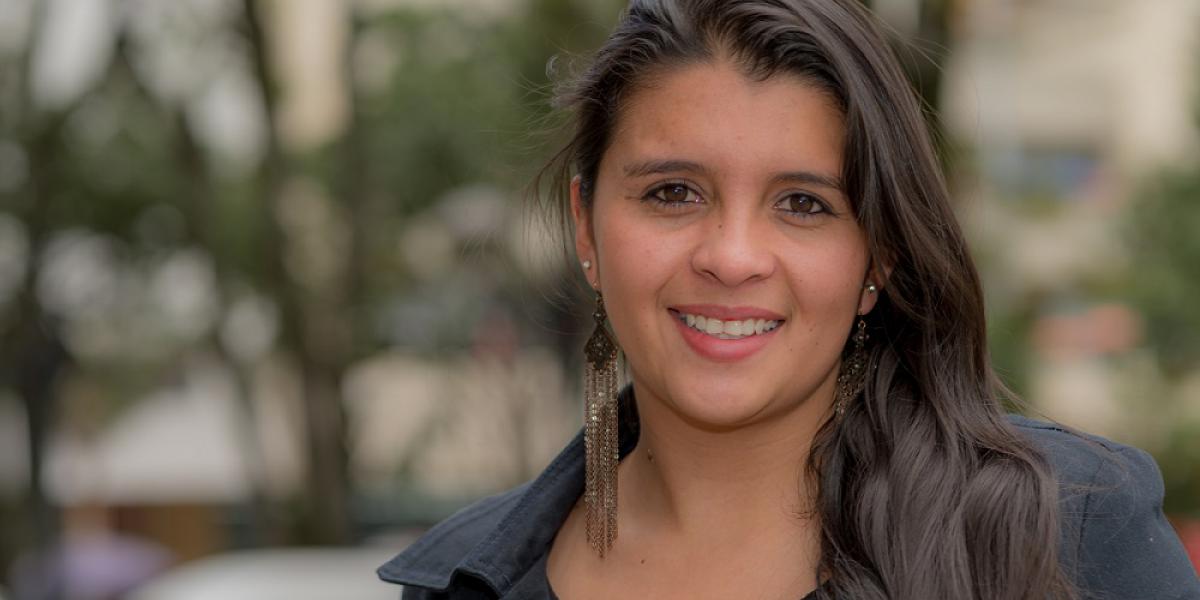 Greif took over uncertainty when, on August 24, 2005, the police informed the family of Marilyn Rojas Sierra, who was 10 years old at the time, to go and identify the bodies of her relatives. "They didn’t want to let me see the bodies because they were left in an inhumane condition. I recognized my father by his little hands, he was beheaded, tortured and shot many times, just like my stepbrother. Both were unrecognizable and swollen because they had been dead for a day".

With a voice that reveals that memories still break her heart, Marilyn, now 22 years old, recalls the day when they found the bodies of Cayito and Diego Alberto - father and stepbrother - dumped next to a water tank in a place called the Cajon, near the municipality of Cundinamarca, Guayabal de Síquima, the Golden Gate of Magdalena Medio.

"We knew that it had been the Black Eagles - a paramilitary group that operated in the region - because they left a pamphlet and had been collecting ¨vaccines¨ blackmail from my father for some time then. From all of us, the one most affected by my dad’s death was my mom because she loved him so much. She was in shock, she didn’t understand anything, she was horrorstruck in a way. The mass was held at the parish and we buried them in the cemetery of Guayabal next to the body of my stepbrother's mother, who had died of cancer".

The origin of the feeling that her mother and the rest of the family had for Cayito dates from the moment when the abandonment of their biological father was superseded by the welcome he gave them into his life. "After my biological father simply recognized us as his legitimate children and left, we met the person who would be our upbringing father, a person who welcomed all seven of us - my mother and the six of us".

His name was Arcadio López Barbosa, he taught them many things, many values and they lived with him for about five or six years. She always saw him as her father and because Cayito, whom they called Arcadio, gave her love, supported her in everything, took them to school, helped them with their homework and took care of them as if they were his own children. With him they went from having only one meal a day to three regulated “chow downs” per day. "He was an excellent dad, my mom stopped working because with him our standard of living changed. He took care of everyone and of the day he was murdered, I remember very well that he told me I had to be the best at everything," Marilyn says.

Anxiety returned to Marilyn's family. "After the death of my father, about two weeks later, we began to receive threats and pamphlets that said 'get out of here, this property does not belong to you'. One of my little brothers, who was 11 years old at the time, was almost killed: they beat him and put a gun to his head".

They did not want to leave the region, but for peace of mind they decided to move to Bogotá, where their rural life style clashed with the multitudes of the capital, this strangled their hopes of survival. Three months later, after learning from her mother's relatives that things were a bit calmer in Guayabal, they decided to return.

"In Guayabal we had to start from scratch because we did not have anything anymore. However, the threats came back and because they saw all of us as small and vulnerable, alone with my mom, some relatives tried to rape me and one of my sisters... Oh how we missed Cayito! We no longer had anyone to receive advice from" she adds.

Marilyn was the only one who attended school because for the rest their needs to survive forced them to give up ¨chalk and board¨. She completed high-school, registered at the National Training Service (SENA) - after that, during a callt they held in her town; she graduated as a Technologist in Analysis and Development of Information Systems; she did her internships in Bojacá -in a flower company in the systems department- and she connected herself with the Institute of Legal Medicine, in Bogotá, in the systems department.

She lived in the Olaya neighborhood, in a bedroom. But her contract expired and she survived on her severance payment ( until she ran out of money. At this time, she wore out her heels until she got a job at a bank where she first updated customer data, then became a board leader and, finally, a post-disbursement auditor. 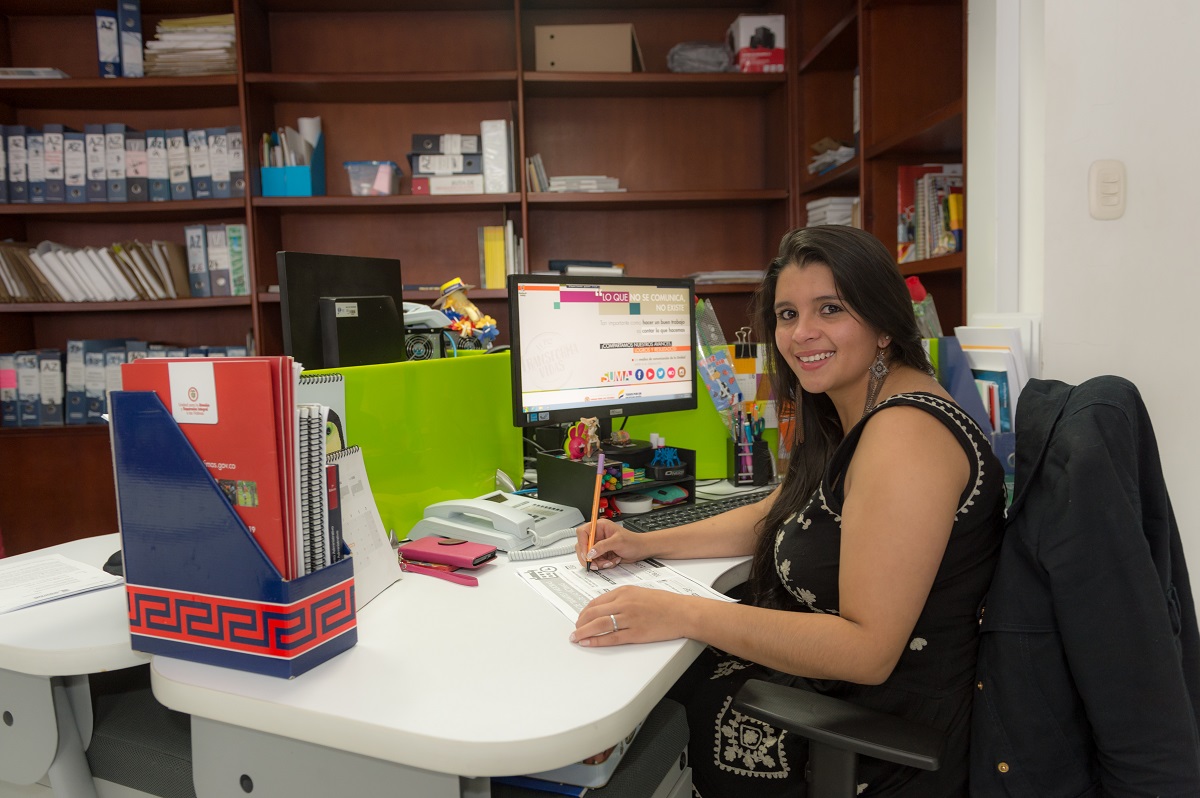 "One day, working at the bank, I learned about the Victim’s Education Fund, between Icetex and the Victims Unit, as well as other entities. Thanks to that I managed to enter the Politécnico Grancolombiano to study Systems Engineering, a very nice moment for me because I was making my dream come true, studying at a university and, besides, that day was my birthday, "she says.

Her happiness was thanks to the Reparation Fund for Access, Permanence and Graduation in Higher Education, an agreement between the Ministry of Education, the District Board of Education, Icetex and the Victims Unit, which seeks that through 100% debt free credits, victims have access to university programs, in order to rebuild their life project and contribute to the construction of a new society with more opportunities.

Within the framework of this program and as a prerequisite for debt exemption, students must carry out a social pedagogy project that seeks to contribute to the process of integral reparation of the victims, they are victims supporting victims with their professional expertise.

From sadness to forgiveness

By the beginning of 2017, Marilyn no longer worked at the bank but one day she received good news. "In March, they called me from the Educational Fund of the Unit for Victims and they told me that there was a job call to give the young beneficiaries of the Fund an opportunity to work with the unit operator. I sent in my resume and, finally, they linked us to 15 people, "says Marylin.

She had a week of orientation because even though they are victims themselves, they do not necessarily know how to take care of other victims. "I had to separate the roles, because now I am a civil worker. Many times when I am treating a victim over the phone and they start crying, I think something has happened to me, but that surely something worse happened to this person, so I must listen to him or her and give them guidance and help, because among the same victims we help each other so that together we can remember the past without crying”, says Marilyn.

The daily treatment with victims has not managed to shield her feelings of the pain from the past, ever since they killed her father neither she nor her family had any psychological support. "Now with the help of the university I go to a psychologist and it is not as hard to talk about my tragedy, that's why I think I can talk and listen to a victim and give him or her advice saying 'you are worth much more than your adversities'".

What does not haunt her any longer is the anger towards the victimizers whom she would forgive if they were to show repentance. "I cannot continue to hold a grudge in my heart either; I am sure that one does not forget but one can forgive from the heart, also because perhaps the person who committed the crime was forced by his superiors to do that".

This is also why, in the face of the peace process between the Government and the FARC, "I simply support it because as a victim and as a human being tomorrow, when I have the opportunity to be a mother, I do not want my children or my nephews to suffer what we lived with during the armed conflict", she concludes.

Now, Marilyn is attending her tenth semester, radiates joy perhaps because when recalling Cayito she thinks of Ranchera music song by Antonio Aguilar: "Oh how I miss my father... how I am going to forget him, I always have him in my thoughts, how I am going to forget him, he is always on my mind, he taught me to work, he advised me to be a decent human being, he taught me the right path and to live as decent people ... ".