There are many types of voices and painting is one of them. Painting, says artist Janeth Yanguas, has the capacity to shout a story that has not been able to turn into words.

That's what happened with her and 38 other women whom life joined because of a bitter condition: being victims of conflict, but which resulted in a collective voice that told the world about them and, in passing, helped them to heal wounds.

Janeth is a woman with cinnamon skin, easy smile, love for art, her family and her dogs. Many years ago, when she had just the first of her three children, she and her husband experienced some of the harsh consequences of war: displacement and dispossession.

Although they were born in the city, they lived in rural area by decision, loved the mountains, smells of the earth, being able to find lemons in some tree on the way home, raising the family in pure air. 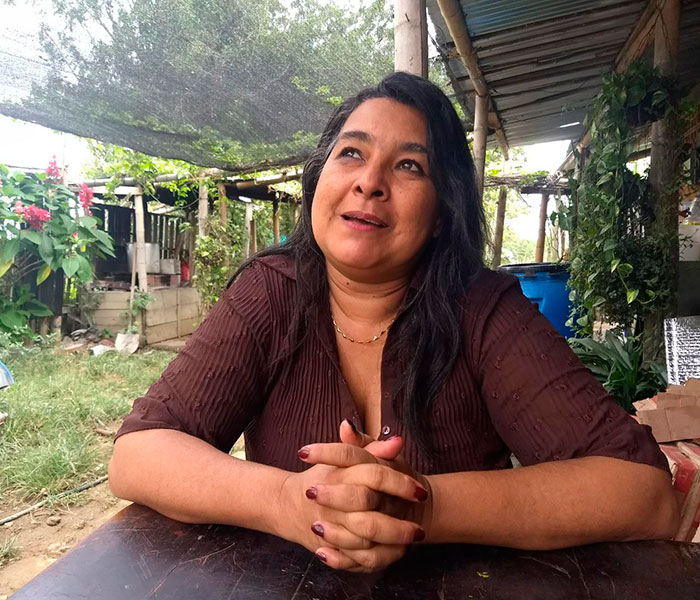 But the presence of armed actors in the sector they lived in ended their landscape and ended up sending them back to the city to start from scratch, as the vast majority of people in displacement condition of the country, which are at least 80 % of the entire victim population.

She is a plastic artist and he is a writer. Both had a special affection for teaching and was carrying out this work that little by little managed to get ahead in the city.

"We were facing many problems, we had also lost an investment that we had made in a lot elsewhere and we did not know what to do, until someone insisted that we had to declare our condition as victims because Law 1448 of 2011 was already in force., that we had to fight for the restitution of our lands", says Janeth.

They got scared. That of declaring, recounting what happened during the conflict made them goose bumps and more considering that the armed actors "were still there in the territory", says the husband.

Finally they took the step, they were included in the Unified Victim Registry (RUV) and in the Land Registry and started a difficult path there.

Janeth's partner confesses that this "victim" sign on his forehead weighs on him, he does not like it. Behind him, he maintains, there is discrimination, difficulties and many times a permanent fear that bad things will happen again. 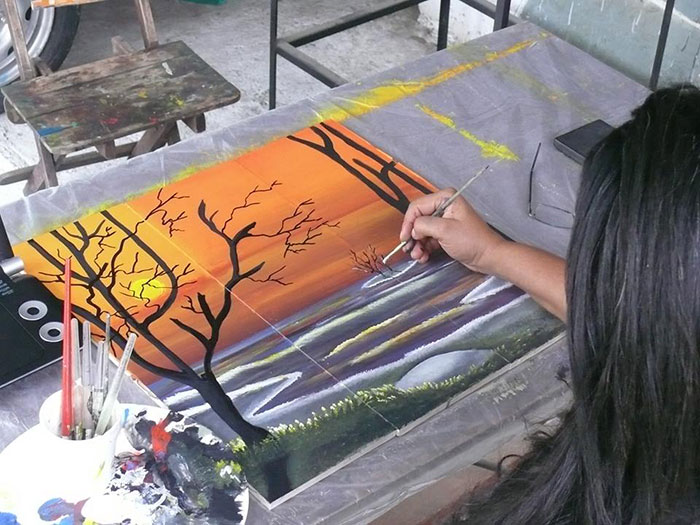 During the process for restitution of their land, Janeth tells that she was summoned to a workshop by Agriculture Ministry in the city of Tuluá, center of the Valley. She says that the bottom line of this activity was to empower women, "because the government was realizing that when it delivered the land, everything ended up being left only in the hands of men, who could sometimes leave their wives unprotected".

When she remembers that first encounter with other female victims she puts his hands on her face. "It was a horrible shock. They begin those stories of all of them, with impressive dramas, sexual abuse, death, pain. It was a tenacious confrontation, so much so that one ends up thinking that nothing happened to her compared to those brave ones ".

So she begins to go through a restlessness: she thought it would be wonderful to paint with them and she remembered her theory that the canvas and the brush are a powerful voice.

To next session she appeared with a box of chalk and told the workshop that she would give her only ten minutes to propose to the group to paint something.

"I had nothing to offer, but I thought that, in my house, with guava branches we could make racks, that we could make a procession or something to get and create together," she explains.

Her idea sounded so good to those in charge of the training that what they asked was: what do you need and we support you to do this well done? The angel that illuminated that path was a woman named María Fernanda Toro, she recognizes.

So it was. The next day there were cartons for each one and the other materials, all in front of some women who mostly had never painted anything, but who were very enthusiastic. The group had a high proportion of grandmothers and ladies who could not read or write.

"It was a beautiful experience, we called it 'The rebirth of women victims painting our dreams. What I proposed was that we put into the work what we wanted with all our heart after living such sad times with the conflict", she said.

The idea that was born with a box of chalks suddenly became a great artistic and interior health bet. These sketches, in addition, would be transformed into real paintings of 90 by 60 centimeters, since they scheduled a new appointment with the group of women to crystallize the works, thanks to Agriculture Ministry support.

This happened in April 2015. Some had to get up in the dark to start the journey from their farms in donkey, motorcycle, and then bus to get to Tuluá again to do their paintings on easels and canvases, like all professionals. This had its place in the ESE Center (health services) of Villacolombia neighborhood, in Cali.

"There was a recurring theme in the works: the territory. When they were asked what they dreamed about, they talked about returning to the countryside, to their lands, having their home again. It was very nice to see them paint their animals and their trees, to see them smile despite all the pain experienced", said Janeth.

In a journalistic record made to this work, El Tiempo told of some of those dreams turned into drawings. Such was the case of Johana Roncancio, who fled the guerrilla in her town in Cundinamarca and reflected in her painting the tranquility of the sea. His work was called "A new light".

They also referred to a woman from Galicia, Bugalagrande, who was killed by her paramilitary groups and sexually assaulted her thirteen-year-old daughter. His painting was dominated by color and sun.

Weeks later, a luxurious hotel in northern Cali was the space in which this special exhibition was inaugurated. With cocktail, media, and different institutions, the artists proudly presented their work "and they looked that day more beautiful than ever".

"What happened in the future nothing could imagine. The works were for many sides, were exposed in the exterior of the Charity of the Valley, in the Casa Matria de Cali, in Tuluá, Palmira and Bogotá. One of them even sold a painting to a man who fell in love with her landscape, I could not believe it! Someone gave great value to what she did and had never painted before! I dream that this exhibition will one day reach the Casa de Nariño, I know it is possible, "says the guide of all this work, who adds that in the exhibition phase they had the support of the Land Restitution Unit and the United Nations.

After all this way, the artists asked to take the paintings to their homes, "they were part of them, of their catharsis", so happy and on a motorcycle, goat, donkey and bus they moved their works to the walls of their homes.

Today Janet only has two of the paintings in her possession, of women who for some reason could not take them. She keeps them as treasures in the house that little by little she raises with her husband in a rural area of ​​the Valley.

"People ask me what I got out of all this, what I won. I answer them as the commercial: 'there are things that have no price... for everything else there is a Master Card'".