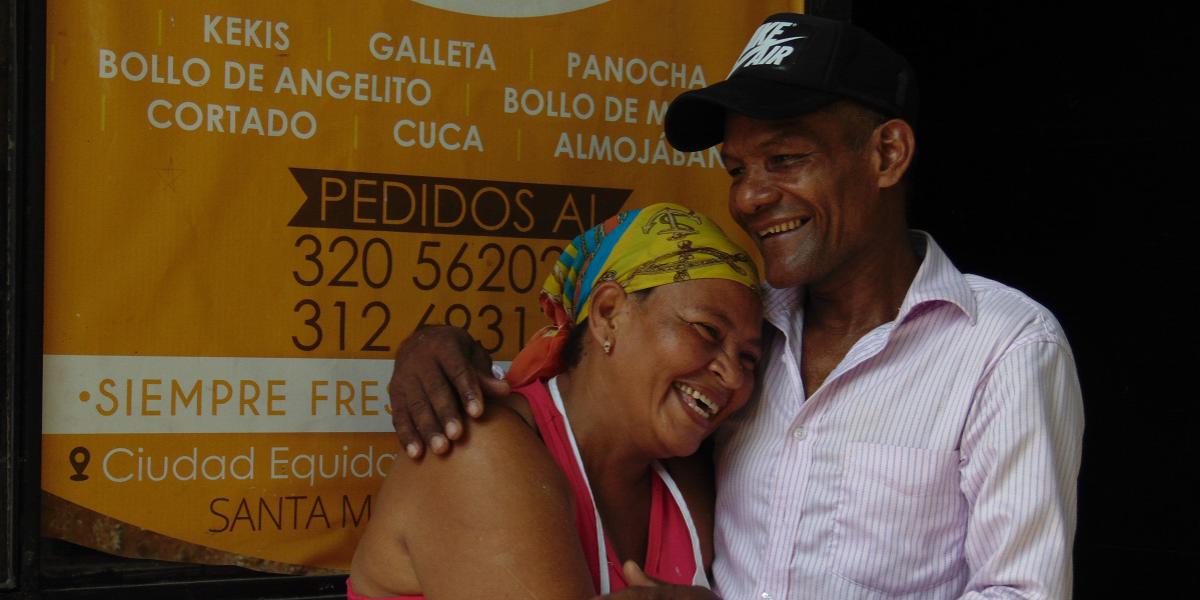 The alarm goes off, it's 4:00 a.m. Jairo wakes up and prepares the first coffee of day while Yosmith, his wife, raises the firstborn so that he can attend on time to the University where he is preparing to be a language teacher. Meanwhile, the grandchildren, slowly because of the dream that is still dormant, dress and take food to go to school.

A bundle with more than two hundred of corn awaits Jairo in the patio of the house. They are like a treasure for the economic support of the family. They must be brushed and powdered to make the famous corn cob, angelito and corn with cheese, which are distributed day by day in different sectors of the city of Santa Marta, Magdalena, under the name of their undertaking: "El Yonki”

Today tranquility reigns and prosperity is felt, but 12 years ago the situation was very different. With knife in hand, in the middle of corns, Jairo Tovar does not show anger or resentment when he recalls how at that time Jairo Antonio Martínez Rosales, alias 'Jeringa', leader of paramilitary groups of Colombia (AUC) in Bolívar South, decided to put an imaginary poster on his chest and declare it a military objective, when they lived in San Martín de Loba (Bolívar).

"I was working in Venezuela and from that trip I saved 5 million pesos and brought a mini-component, I set up a small business in the town that saw me grow up and where I met with my current partner, and we started selling pastries, buns, beers. Then I made a loan and invested in the business; we even distributed goods", recalls Jairo with nostalgia and resignation.

Prosperity, however, would not last long. Martinez Rosales, who led a crime under the command of Salvatore Mancuso Gómez, head of the AUC's Córdoba Block in 2005, ordered his subordinates to ask in the store of Jairo and Yosmith everything they needed for the sustenance of the armed group illegal. Thus, they ended the tranquility and harmony of the family, who lived from the ranch shop, food and liquor.

"They started with a bag of salt, another day they returned for other things, but one night they knocked on the door and demanded on behalf of their commander a basket of beer, ice, a cd and a fan, and although I mentioned them that only had 2 fans of my son and mine, they told me that mine should be delivered", says Jairo.

Orders that changed the life

AUC orders at Jairo and Yosmith's store increased rapidly. "They forced me to take them to a hill and the next day I went up my beer basket, and from that moment they started to go every other day and even with a list of products they needed, at the fifth I denied the objects because the moment they had not paid me and I threatened them with a toy gun". From that moment, Jairo was declared a military target.

The buns and biscuits, baked by Yosmith, corn with milk, anise, flour, and oil were no longer enough for the support of the family. Comply with the orders of the day in the makeshift factory that they built in the patio of the house located in Equidad city urbanization, it did not reach then to live as before.

Denying the orders of Autodefensas group was a death sentence for Jairo; he had to move to a nearby village. But I would not be calm there either. A short time later, two armed men approached and asked a neighbor about him. "My neighbor approached very agitated and nervous, he told me that some guys on a motorcycle were looking for me and they were armed, they said that I was on the death list. I took my wife and children and until the sun today I have never returned to San Martín de Loba".

Nobody is a prophet in their own land

Jairo and his family arrived in Santa Marta, where he testified before the Public Prosecutor's Office on October 14, 2005, that he had been displaced from the south of Bolívar. At that moment he began his path of integral reparation and prosperity began to approach his life again.

It was good news, but at the same time there were others that could have been discouraging. In the middle of the repair process he was diagnosed as a patient with chronic kidney disease.

The disease, however, has not been an impediment to get ahead. "In the midst of my illness, I trained, I received help from several state institutions and I did business strengthening workshops and with Semilla Capital I had financial and material support to continue with the same project already undertaken in San Martín de Loba", says Jairo.

Seed Capital is a call in which entrepreneurs participate, among them survivors of the armed conflict, and has the support of Innpulsa Colombia, the Chamber of Commerce of Santa Marta and the network of Magdalena Entrepreneurship.

"With that impulse we managed to create the brand 'Yonki typical products' and sell around 300 buns a day, more than 150 cookies, we also have kequi, cuca, cortado, almojábanas, among other products; In addition, they indemnified me and my son administratively and the family received more than 10 million pesos", he relates with emotion.

In his words he does not express any grudge. "I only ask the perpetrators to ask forgiveness from God and the victims, that I do not hold a grudge against them, that they repent and that although they caused me harm, I do not hold any resentment against them. Someday I dream of returning to my land, I am here because I have to face the disease, but if I could return to my village I would be the happiest man", concludes this man whose resilience has allowed him to continue to prosper alongside his family.

Jairo and Yosmith dream of turning their business into a microenterprise. They are already registered in the Chamber of Commerce and little by little they have been able to overcome the barbarities of the armed conflict. "Our life continues, nor the armed conflict managed to stop the dream of getting ahead", he emphasizes with his customary optimism.