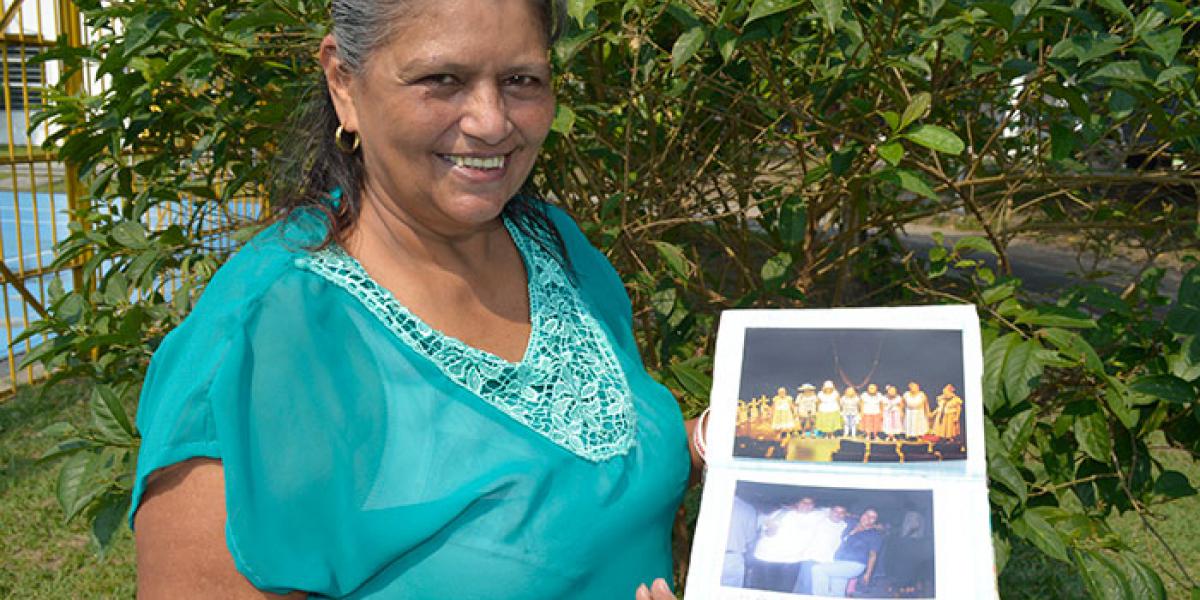 Amparo, from Bogota, traveled from her first years of life to the most remote lands of the plains with her mother. She knew the beauty of the Mavicure hills, which, honoring the legend of the Puinave Indians, grew up as a "woman with a sweet smell" amidst the environmental diversity of the Guainía province. She lived the fertile expanses of Vichada and Meta plains, always looking for her family to have opportunities to get ahead.

She was a mother at a very young age. "My children, two men and two women, have very little age difference. With their arrival, they became the engine that moves my life. "

Suly Flasmín Camelo Buzato, the oldest, gave birth to her when she was 16 years old.

"For the same situations that have accompanied the women of my family, Suly left with my granddaughter, who at that time was only 9 years old, to work in Guaviare proince. In conversations that we had on the phone she told me that public order in the village where she was living was difficult, that she was afraid and that they could not leave, "she says.

An ineffaceable date for the heart and mind 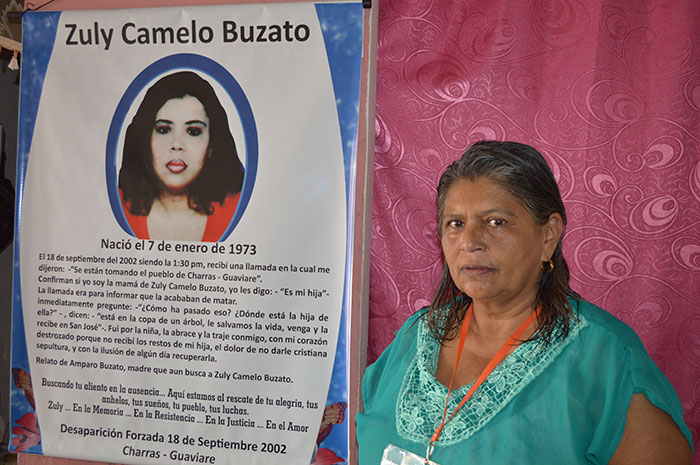 Amparo recalls as if it were yesterday the call she received on September 18, 2012. "We killed our daughter, and don’t even think of coming around here anymore or we will do that same thing to you," they told her, with no space to ask for answers. He hung up and disappeared.

"At that moment, in the midst of my pain, the only thing I managed to match was the one brought by the girl from Suly. She very little wanted to tell or tell about what had happened with her mom, "she says.

After what happened, Amparo was linked to the victims' processes. She wanted to hear about her daughter and along the way she met more women than she did, they had a story to tell and fight for.

"I have been part of the Victims' Board, member of Victim’s organizations and I was part of the National Movement of Victims of State Crimes (Movice). In these years I recognized in the pain of others my own pain and I understood that we owe to a single cause: peace, "she adds.

For a commission of victims who would travel with an NGO to Guaviare, Amparo decides to go to that department in search of a report about her daughter. "I managed to get some people who knew her to tell me what they had heard about the day. Suly was 8 months pregnant, she was shot several times and then her body was taken away. To Tania, the neighbors managed to put her on a tree that saved my little girl".

"My life split in two, before and after the disappearance of my daughter. Before, each member of the family was engaged in their work and to see how they got their daily income, always very aware of each other. Later, my world became an answer, in organizing, mobilizing and becoming an instrument so that what I have lived in the more than 20 years of waiting, does not happen to anyone else. " 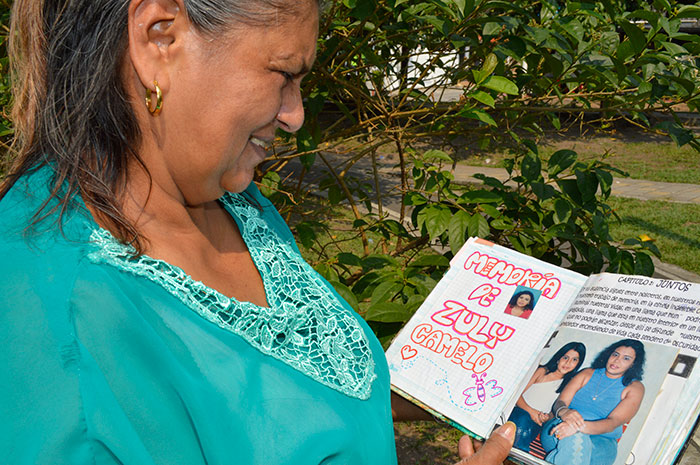 The theater, a mechanism to touch hearts

This is how 4 years ago a group of mothers of victims of forced disappearance, looking for a way to express the pain of what they underwent with their families, decided to form a theater group which they called "Las Corocoras".

"At the beginning we started as a choir, we sang songs about what we experienced. Then we asked a theater teacher for help, we told him that we wanted to make people aware of what we had experienced and that the audience would leave with a message of reflection. They helped us with the scripts, converting what at one time was a dream into a reality, "says Buzato.

These women, who sometimes are 6, 7 or 8, with a staging of almost an hour, narrate their stories one by one. They are natural actresses. The stage becomes an ode to life, hope, and forgiveness.

With flowers, candles, and an element that cannot be absent: the photographs of theirs, those black and white faces that appear in the assistants to the functions to make them feel that need of the victims to the truth and the reconciliation. 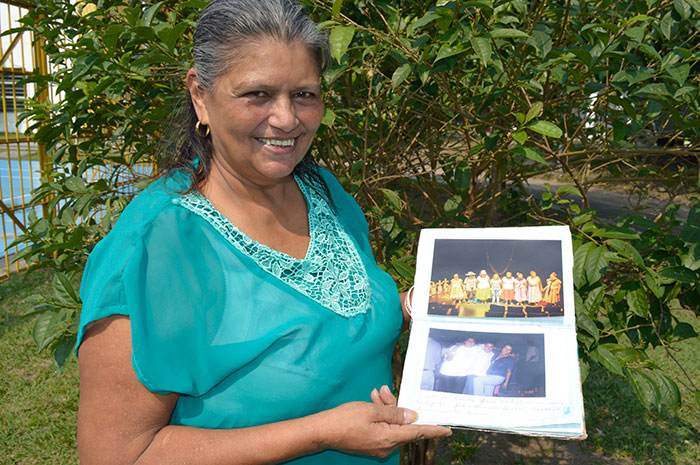 "It is not easy to tell our stories over and over again. It is not easy because our wound is open. Each time a tear comes out in the work, each sob, each lament, has a real emotional charge. Our pain is not acted, it is here, "says Amparo, while touching her heart with her index finger.

Since the first presentation, theaters have already played in Bogotá, Manizales and in more than 15 municipalities of Meta, becoming ambassadors of peace in the country. "We are planting a small seed on every platform we step on," she says with a gesture of pride on her face.

Amparo is an inexhaustible defender of the end of the armed conflict. On this subject it expresses: "The war in Colombia leaves us a scary figure of more than 8 million victims in the country. No fact lived in the context of violence is worse than another, all are hard, leave an indelible mark on those who have lived. We, the mothers and families of the victims of enforced disappearance, carry a cross every day and night of our lives: knowing where our children are, brothers, fathers, and friends. Not being able to bring even a flower to his grave breaks our soul. "

"What worries us most today is the possibility that these cases may recur. We cannot allow indolence to reign in the hearts of Colombians. We do not decide to live what we live, that's why we prepare and train to speak and reach all corners of the country. We want a country that is aware of the human cost of the conflict. "

According to the Observatory of Memory and Conflict, of the National Historical Memory Center (CNMH), more than 82 thousand people (equivalent to twice the capacity of the Atanasio Girardot stadium in Medellin) have forcibly disappeared in the country from 1958 to the present.

Write, Act, and Fight to live

"... And I have many more things to say, but I do not want to write anymore because I feel like crying and I do not want to. I would only have liked to tell my mother that I loved her and I still love her for the rest of my life ... "wrote Tania, Suly's daughter, in a book about the narratives of the conflict in Colombia entitled The Story Behind These Eyes, a documentary exercise of the Ombudsman's Office, the Gobernor´s office of Meta and the Unit for Victims in 2010.

There, his memories were also recorded by Amparo and a brother of Suly. They talked about their tastes, their personality and what they have felt in so many years of waiting. "We participate by writing a message, of what we feel and miss. It was very special to be part of that process, "says Buzato.

"... I want to remember her as always and ask God to give me strength to follow this way of the cross. I also pray to God that justice be done for all of us who are in need of great strength ... "Amparo wrote in the same document.

The Peace Agreement created the Search Unit for Persons Disappeared in the context of the armed conflict, as a search mechanism of a humanitarian and non-judicial nature.

"Any decision of the State aimed at finding the truth will be well received. We want to know not only where they are, but also what happened and who should assume the weight of justice. He recently closed a very famous case of a mother who finally after many years, knew the whereabouts of her son's body. Listening to her made me think of the rest that this news generates, beyond the sadness of assuming definitively the loss of a loved one, "says Amparo.

"I will continue living to find my daughter ... now I have a new purpose. Reach many people sensitizing and disarming their hearts. Every time I get on a platform, I'll go up with her, with her memory. I feel that she is with me telling her story, asking us not to forget her. Getting people to measure what has bled the conflict, is a gain of both, "he says.

At this moment, she is serving a new term as a member of the Municipal Table of Victims of Villavicencio. Follow with a packed schedule of presentations of "Las Corocoras". One of them will be the commemoration of the Day of Memory and Solidarity with the victims of the armed conflict in Villavicencio on April 9.

There, in the Central Park of the capital of Meta the “ Llaneros” will be able to see Amparo from the hand of her daughter, performing not to be forgotten.