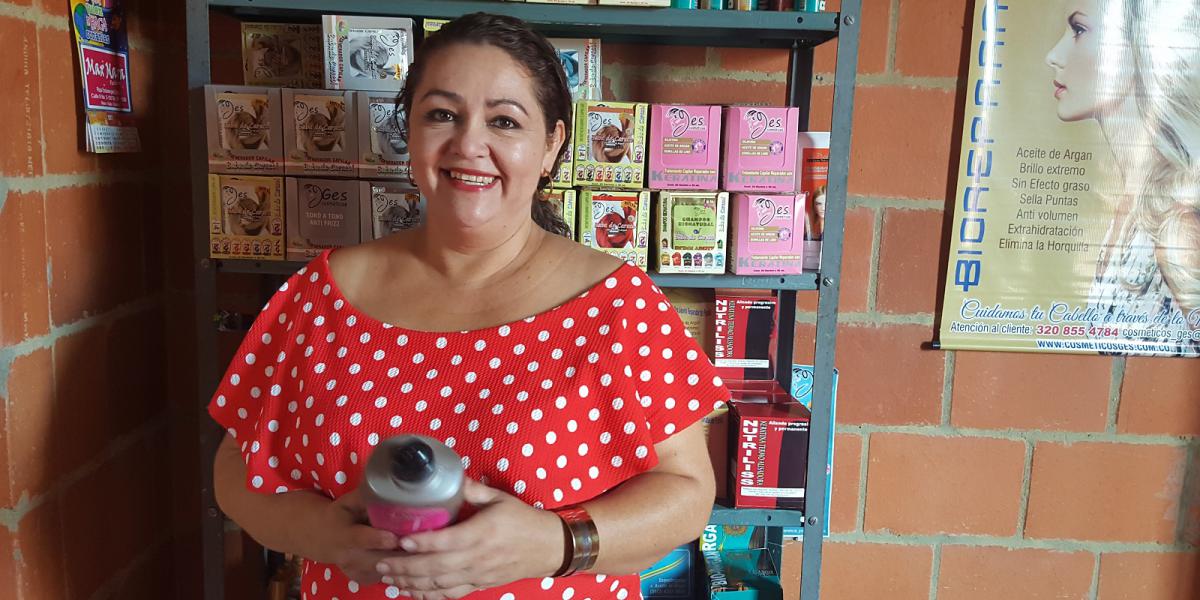 Alba Luz Pradilla has had to forcibly move twice, and to take refuge in Mexico once, due to the internal armed conflict. The first for fear of threats from the FARC and the second for the murder of her husband at the hands of the same guerrilla group (now in the process of demobilization). The third, he was advised to leave the country and went to Mexico for several months.

She raised her three children alone and today she leads the Association of Women Victims of Huila. Not many years have passed since these tragedies happened to her and her words are far from those of a person sunk in pain and pessimism: "life made me smile again and I know that I will be able to fulfill my dreams and help other victims to reach theirs".

Just the beginning of the 21st century, when Alba Luz separated from her first husband and started working as a factory worker in Bogotá, to get the two children she had left behind from that union. After two years, she met José Alejandro, who later became his permanent companion. Another similar period passed and her third child arrived, the consolidation of home.

In 2005, the entire family moved to Huila, since José Alejandro had gotten a job taking care of a farm in the municipality of Baraya. It seemed like a beautiful place to build the family.

Only eight months passed so that they understood that it would not be like that. They received visits from guerrillas of FARC, who informed them that they wanted to recruit their 11-year-old daughter Lorena. The fact generated anguish and the couple decided to flee immediately.

They took refuge in the house of Alba´s uncle, in San Vicente del Caguán, who helped them find work, she in a restaurant and her husband as an assistant in a transport company. And the progress began to be evident.

In 2007, the couple had enough savings to set up their own business, a tobacconist who was reached by all kinds of people, including police and military. Then, the rumor arose that Alba, was an Army informant and received multiple threats that led her to close the business.

Now, the family lived on the intermunicipal public transport vehicle that her husband bought. She could not return to work since the threats against her life did not stop. He brought them to the attention of the authorities, the Red Cross, the Ombudsman's Office, and other entities that he does not remember, without receiving any response. For a time everything seemed to calm down. They felt happy, the children studied, the husband worked and she did housework. But the armed conflict appeared again in their lives. José Alejandro began to have problems because among the passengers he had to transport guerrillas and if he did not they threaten him. The authorities began to associate him with the guerrillas.

In December 2011 the guerrillas ordered José Alejandro to pick up and transport some food in his vehicle to deliver it to a certain place, he refused and was threatened again. A few weeks later, he was ordered to transport a group of guerrillas and he ignored it.

Daring to challenge the guerrilla group that controlled the region, had as a consequence that on December 26, 2011, after spending a happy family Christmas, José Alejandro was killed. He started on the bus at his destination very early in the morning and Alba heard from him again at 6:30 p.m. when Jesus Antonio, his brother, called her to give him the worst news of his life: he had been murdered and the vehicle was cremated.

"There I change my life, my tranquility was over, from one second to another everything changes for me", says Alba. In the middle of the funeral home, after his co-workers picked up the body, the guerrillas told her that she had six hours to leave the town, or she would have the same luck. Alba had no choice but to flee again, with what little she could carry, this time to Bogotá.

The body of her husband was sent to the capital of the country and on December 29 she gave him a Christian burial. Then she settled in Neiva, where threats against her and her children followed her. She changed her physical appearance and it did not work, so the United Nations Agency for Refugees (UNHCR) supported her to leave the country for three months, placing her in Mexico.

She returned to Neiva, to her mother's house. The four of them slept in a bed-room with two beds, had no job and the situation became worse every day. The need caused her eldest daughter to start working in a casino and give up her dream of becoming a dentist.

Alba, however, maintained confidence. The first thing I achieved was to become a homeowner thanks to the Red Unidos strategy of Presidency of the Republic. She received her apartment completely free in September 2015 and in this same year another love came to her life: César, a psychology student, entrepreneur, who has given her support and affection, and motivated her to have an independent business. She turned in distributor of a brand of hair products, based on snail slime; Today she takes them, with her daughter, to the entire department.

In March of this year, Alba and other women victims of the armed conflict decided to create an Association of which she is the legal representative. "With the Association of Businesswomen Victims of Huila seek to manage resources that serve as seed capital to grow and be an example of strength and improvement for other victims who need to find mirrors that encourage them to move forward, so that they overcome, like me, its victimizing fact and become entrepreneurs", she says.

Alba dreams of her consolidated distributor in her own place, from where she can teach all Huila's women to properly care for their hair. Her greatest wish is to see her children become successful and happy professionals. She keeps a sad memory of the war, she still generates pain, but the vision of the promising future that she has decided to carve herself encourages her to keep going little by little.