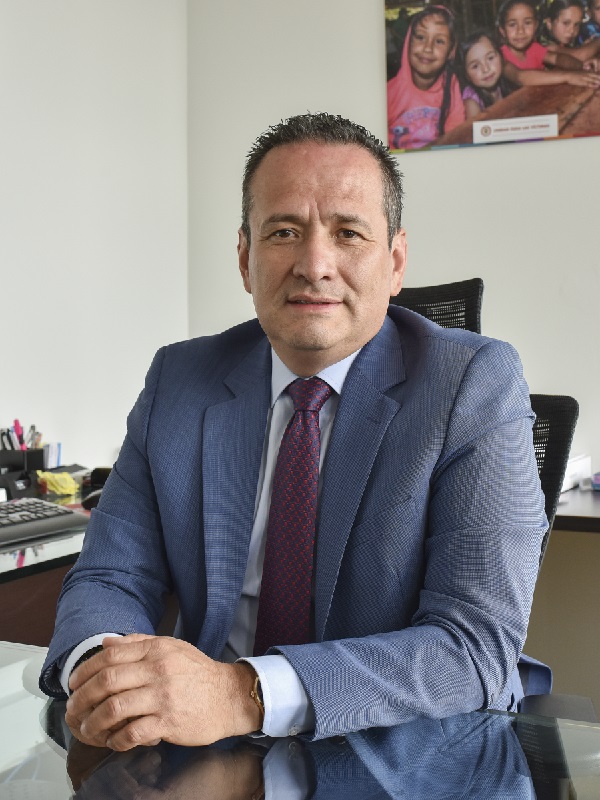 Ramón Alberto Rodríguez Andrade was ratified as General Director of the Unit for Victims on April 23, 2019, after assuming the position of Deputy Director the Entity for more than 7 months.

A man with sensitivity for social issues, knowledgeable about the dynamics of work in territory and committed to the construction of the country based on the potential of victims of the armed conflict, people from whom he has learned about courage, tenacity, resolution, resilience and, especially, of what we are capable of achieving when we work with passion to make our dreams possible.

He is a professional in industrial engineering from the Catholic University of Colombia, a specialist in Development Projects and Senior Management of the State, from Escuela Superior de Administración Pública (ESAP), and Master in Cooperation and Sustainable Development, from the European Institute of Higher Studies. He has extensive experience in public administration, university teaching, comprehensive quality management, strategic planning, social project management, public policies, and community work.

He was executive director of a metalworking center in Guaviare, director of the Departmental Fund for Microenterprise Support and Escuela Superior de Administración Pública (ESAP) in this department; He has also taught at the National Learning Service (SENA) and the National Open and Distance University (UNAD).

He worked for a year and a half as Secretary of Government in the municipality of San José del Guaviare, when the call for the Social Solidarity Network was presented - which later became Social Action. After nine years as Territorial Director of that entity, he arrived in Bogotá as coordinator of the four municipalities of the department of Guaviare and two in southern Meta (Mapiripán and Puerto Concordia).

In Bogotá, he worked for a year with the United Nations National Development Program (UNDP) and then joined the Unit for Comprehensive Care and Reparation for Victims, initially as a contractor acting as Subdirector of Prevention and Emergency Management Area, where He coordinated the Emergency group and held the position of Deputy Director of this unit. Within the Unit, he subsequently served as Secretary General of the entity and was Deputy Director in charge in two instances.

In 2018 he assumed the position of Director General (e) of the Unit for Victims, while serving as Technical Director of Social and Humanitarian Management, an opportunity that allowed him to influence the policy of Prevention, Protection, and Guarantees of Non-Repetition , ensuring the immediate and timely attention of humanitarian emergencies arising from the internal armed conflict, in addition to the entire process of delivering humanitarian aid to the population included in the Single Victims Registry.

As Director General in charge, he undertook a robust agenda aimed at achieving strategic alliances, obtaining resources, and managing everything necessary to strengthen the path of implementation of Law 1448 of 2011 and, therefore, to comply with more than eight million victims of the armed conflict that our country has, as a result of this successful career in the social sector and his reliability, as of April 23, 2019 he assumed the position of Director General of the Unit.