Diagnosed with schizophrenia and bipolar disorder, Mineria Palomeque Martinez helped the wounded who had not been evacuated to Vigia del Fuerte on the Bojaya Massacre’s night. She also organized the dismembered bodies, due to the gas cylinder bomb explosion, in her own way: the head of a child with the body of an adult, with two right feet and two left arms, and so on. Four people who knew her closely retell her life. 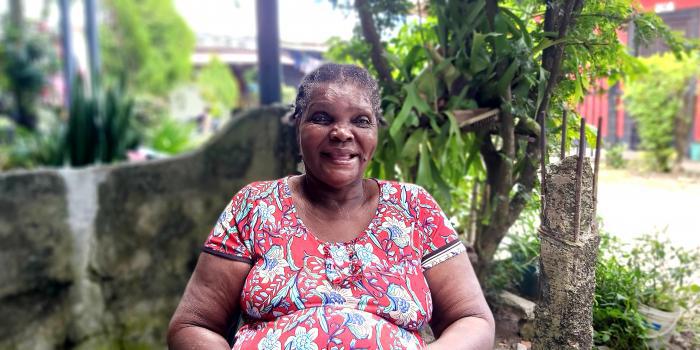 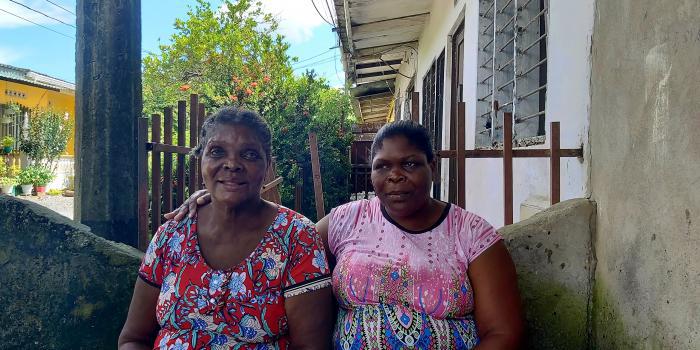 By Cesar A. Marin C.

"I'm so angry, that I could give machete even to priests today." Mineria Palomeque Martínez used to say this every time she arrived at the priest’s house in a bad mood, recalls the priest Antun Ramos. He was the one who led the evacuation of the most seriously injured people to Vigia del Fuerte (Antioquia) minutes after the explosion of a pipette bomb inside the church of Bellavista, in the Bojaya municipality (Chocó) on May 2nd, 2002, the day of the Massacre. That violent event caused the death of at least 80 people, and another hundred were injured; this happened in the middle of a combat between the extinct FARC guerrilla and the paramilitaries.

Mineria was born 72 years ago in Murri, in Frontino’s municipality (Antioquia) near Vigia del Fuerte. Little is known about her childhood and teenage tears. Her daughter, Aida Mosquera, now 48 years old, says that her mother and father, Luis Eduardo Mosquera, met in the seventies at her grandfather's house in Murri, but they lived together for a short time, and she (Aida), was raised by her maternal grandparents.

"I never called her mom, I called her 'Mella', because she had a twin brother named Justino, who has already passed away. I also called her like that because my maternal grandparents raised me, and I rarely saw her,” recalls Aida.

By the end of the seventies, Mineria had a relationship with a man named Jose Orfides Florez. They had a son who was named after his father. After a few years, the relationship ended. In 1984, Mineria married "a man named Bonifacio, who had a rural property, and she worked crops with him near Vigia del Fuerte," Aida explains.

One day in November 1985, Aida received a tragic call: her mother's husband had attacked her with such violence that Mineria miscarried. She traveled immediately to be with her and, upon arrival, she found out Mineria had been forcibly anesthetized in one of the region’s health centers, where they had to extract the deceased baby. She had refused, but her life was in danger. "That situation caused her a lot of sadness, and I think that's where her mental problems began."

At that time, Aida lived in Medellin, and she tried to take her away, but Mineria refused because, days after the beating, she "got together" with her husband. Mother and daughter fell apart for almost four years until one day Aida went to visit her in Murri. There, she found out that her husband had abandoned her and her uncle (Mineria's brother), had temporarily taken care of her, but he was not going to do it anymore. Aida, barely a 16-year-old teenager with two children, could not take care of her either.

So, she made a proposal to her father, Mineria's first husband. “Since you never looked after me or helped me in anything, take care of my mom. Welcome her in your place and take care of her,” she told the man. "That's why my mom got to Bellavista around 1991," she recalls.

Over time, Mineria's mental health worsened. Only a few priests and the Augustinian nuns: Macaria Allin and 'Mayito' looked out for her.

'Mayito' and the love for Mineira

Maria Eugenia Velasquez, 'Mayito', met Mineria as soon as she arrived in Bellavista and always considered her a special person. Despite sometimes she was a bit aggressive, 'Mayito' grew fond of her. On one occasion, along with some women, they decided to clean Mineria's house. “We arrived and she was very upset; she practically chased us all the way to the mountain,” she recalls laughing. On another occasion, the nuns found her with a head injury.

“I enrolled her in Sisben and managed to include her in the elderly program Adulto Mayor. I also arranged for them to issue her ID because she didn't even have that,” recalls Mayito.

In April 2002, there were rumors about armed actors’ presence close to Bojaya’s urban center. It was said that something very serious was going to happen.

The day went by under lots of tension. Neighbors heard the guns greatly concerned. “Night and dawn came, and people couldn’t sleep due to fear and overcrowding. I was with my sister and two of my children.”

On May 2nd, around 11 a.m., a couple of meters from Macaria’s location, a pipette bomb exploded inside the church. The explosion skinned part of her youngest daughter's back. Her other daughter, who is mentally disabled, lost three toes on her left foot and, in addition, her leg was split open. Macaria was hurt in the clavicle and spine, and a shrapnel hit her leg. Her sister's ears burst. They were the only ones who survived from a group of 30 people who were huddled together.

Immediately, almost like a procession led by Father Antun Ramos, they began to evacuate the wounded to Vigia del Fuerte, a municipality right in front of Bellavista.

“My little girl was among them. Despite her injuries, I handed her over to a friend to take care of her. At the end of the day, there were seven of us wounded in the church,” explains Macaria. With Mineria’s help, who didn’t get hurt and helped as a nurse, they managed to reach the parish house.

“Mineria helped us a lot that night: she gave us water, she gave us blankets she took from the priests' rooms, and she covered us, because that morning rained extremely hard. She swept and mopped all that 'bloody water' so it wouldn't reach where we were," says Macaria.

Among the deceased was Luis Eduardo Mosquera, Mineria's first husband and Aida's father, who didn’t die inside the church, but in the port. A sudden heart attack ended his life after the explosion of the pipette bomb in the church, just when he was trying to get on a boat to flee.

After leading the wounded transport to Vigia del Fuerte, priest Antun Ramos returned to Bojaya with garbage bags to remove the dead. There, he found that Mineria had decided not to leave town to stay with them. She arranged them on her own way: a child's head with an adult's torso, with a man's left leg and a woman's right, and so on. "That night she helped several wounded who stayed there, giving them salt water and making tourniquets," says the priest.

He still remembers what Mineria was like when he arrived in Bojaya. “She was like those characters in small towns that everyone knows, people that throw stones when they get upset. She used to go often to the priest's house asking for food, water, or just to ask us something, but always with very short clear minded moments. I remember that she was a helpful person, and when she was in a bad temper, she would go to the parish and say: "I'm so angry, that I could give machete even to priests today," the priest laughs.

“I am incredibly grateful to her, because on the night of May 2nd, 2002, she saved lives. All my appreciation for someone who, without trying, did a commendable job."

Once almost all the survivors were in Bojaya, they massively moved to Quibdo to draw the Government’s attention. "We left Mineria in Vigia, but we left her with a family," says 'Mayito'.

Soul wounds take longer, much longer, to heal. Aida believes the Massacre worsened Mineria's mental health. "War drives anyone crazy, and even more so if they have history and behaviors associated with mental illness."

Around 2015, Bellavista’s Augustinian nuns informed Aida that Mineria's mental health had worsened, and someone needed to take care of her. As a result, she managed to get the Unit for the Victims, which had already compensated Mineria as a conflict victim, to provide her with resources to get psychological care.

“I used to leave Chigorodo (where I lived) towards Turbo, there I would board a small boat, cross the Uraba Gulf, take the Atrato river upstream, pick her up in Bellavista and take her to the psychiatrist in Quibdo. People from the Diocese's Meeting House helped me there,” says Aida. The diagnosis: Mineria had suffered from schizophrenia with bipolar disorder for several years.

In 2018, Aida took her to Chigorodo to live with her. “That day we went with the nuns to say goodbye to her at the port, and many of us shed tears, because she will always be a special person for us. Sometimes, I call her to daughter's cell phone and ask her if she already has a boyfriend and she tells me: 'What boyfriend at this point in my life,'" says 'Mayito'.

In November 2019, Mineria and Aida returned to Bojaya to witness the scientifically identified remains delivery ceremony of the people who died in the Massacre.

During the events, which lasted several days, a total of 99 chests were delivered and duly buried in a mausoleum built for 78 fully identified bodies, a pit called 75, which corresponds to the miscellaneous remains that could not be associated with the already identified bodies: an unidentified body of a minor between the ages of four and eight, nine babies who died in the womb of their mothers and eight victims who are still missing. All this without counting the symbolic delivery of two remains that weren’t found.

That date’s pain left deep marks still palpable today, as Mineria’s case. “Sometimes, she would start mopping the floor saying there was blood there, perhaps referring to what she did that night. We got to the point of buying a mop just for her, because she didn’t like it was used for other tasks,” says her daughter.

Despite difficulties, Mineria's mental health has been improving since 2020. “She is no longer hallucinating; she is very quiet, and she is not aggressive at all. I feel the medications have helped a lot and I take her to the psychiatrist twice a year, which is now in Medellin,” says Aida.

Today, Mineria’s life goes by surrounded by the peace that perhaps she never had. Hers is one of the dozens hardship stories left by the Bojaya Massacre, also one of the millions of lives marked forever by the armed conflict.

On the night of May 2nd, 2002, in the midst of horror, Mineria showed compassion and tenderness by caring for the wounded and looking out for the dead. Twenty years after the Massacre, one wonders if Colombian society has learned to grow that same tenderness, to show its compassion not only for those who are no longer here, but also for those who are still alive, despite the life’s blows.