The act was carried out in the municipality of San Pablo de Borbur with the presence of the regional authorities, mayors of the municipalities that are part of the province and the community 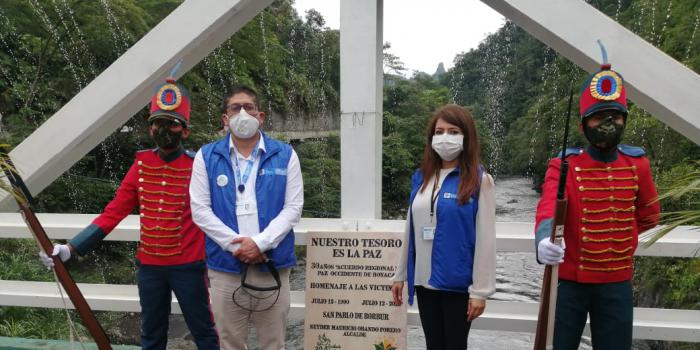 The Victims Unit accompanied the commemorative events for the 30th anniversary of the signing of the peace process that sealed a long period of violence in western Boyacá. Remembered as "the green war", the clashes between families killed hundreds of people in the 15 municipalities that are part of the western province in this department.

The activity was carried out in the municipality of San Pablo de Borbur, with the presence of Governor Ramiro Barragán Adame, of the mayors of the province, businessmen and members of the community. The Boyacá president highlighted the importance of the peace process in this region and described it as an example for the country and the world.

“Here the confrontation caused families to face each other and trying to pass to another municipality meant death; For this reason, the peace process symbolizes that it was developed on a good basis and that, despite the difficulties, because there have been many, we can say that 30 years have been fruitful and we hope that this peace will last in better conditions of life for its inhabitants". Concluded the president

The Central territorial directorate of the Victims Unit made a presence at the commemorative events and participated in the signing of the book of Peace as a symbol of commitment of State entities to support actions that promote coexistence and better opportunities for the inhabitants of this Boyacá region.

"We also send a message of approval to local, regional and community authorities in the distance that today they have managed to overcome this bloody war and that allows them to overcome so many difficulties. From the Unit we are ready to continue contributing to the fulfillment of our mission for the benefit of the victims of conflict", said María José Dangond David, Central territorial director

The municipalities that are part of the western province are Chiquinquirá (capital), Briceño, Buenavista, Caldas, Coper, La Victoria, Maripí, Muzo, Otanche, Pauna, Puerto Boyacá, Quípama, Saboyá, San Miguel de Sema, San Pablo de Borbur and Tununguá and it concentrates a victim population of 8.674 people affected by the conflict according to the official figures of the Unit.