The flavors of the pacific, the ancestral knowledge of indigenous communities and in general the culture of Nariño people, were the protagonists in the commemoration that victims of the conflict made in Pasto. The survivors reiterated the call to the violent ones to stop the hostility and violence in the south of the country. 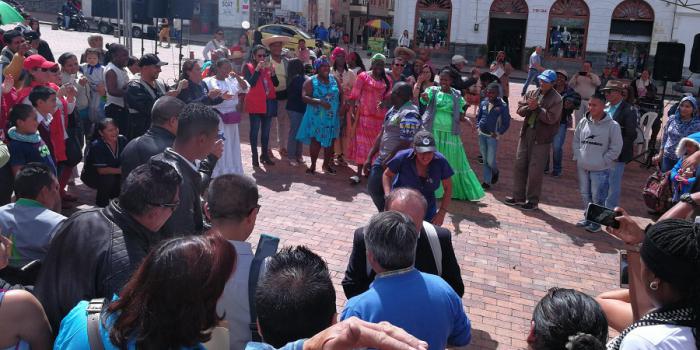 With a march that began in the square of Santiago and toured the center of Pasto until arriving at the Nariño square, victims of conflict commemorated in Pasto the National Day of Historical Memory. In the commemoration the survivors emphasized that culture is a value of the people from which one can work for the reconstruction of the social fabric in Nariño.

On the second day of commemoration, the survivors of conflict representing different communities and ancestral peoples, showed their culture, their roots and exposed the work done to recover the cultural knowledge, oral tradition and the vocation of peace of their peoples.

To rhythm of currulaos, and singing pacific songs, with typical costumes of the coast, representatives of the victims of the 10 municipalities of the pacific coast of Nariño took the center of Pasto. The march also saw the presence of the indigenous peoples settled in the interior of Nariño, all marched with the purpose of becoming visible as victims, calling the attention of the Nariño community to show that the victims want peace to be consolidated in this section from the country.

The community could appreciate the culture, the knowledge and the gastronomy of the pacific region, and of Sierra ancestral people. In the heart of Pasto, Nariño Park, the victims set up booths in which they gave samples of their gastronomy, sang their songs and reiterated that culture is something that the conflict did not take away.

Elsy Ferrín is a victim of the conflict, and deeply knows the secrets of the cuisine of the Pacific, she along with a dozen women from all corners of Nariño, gave the assistants and passers-by the shrimp ceviches, the toyo Crab sticks in addition to traditional drinks. For its part, the yucca, chiro and banana prepared in different presentations by members of the Awa people, delighted the palate of hundreds of people.

"Our culture is something that we have in common, that makes us different, but that also brings us closer, allows us to be brother to all peoples, we are working to rescue it and to encourage our young people to want more of their race, their customs and their territory, culture, dress, food, dialect, our songs and joy are the most valuable that we have and therefore now indigenous and Afro, in general, the victims we will have to return our culture to face what has happened to us", expressed Ferrín who is recognized for her leadership and contribution to culture.

During the commemorative ceremony, acknowledgments were also given to leaders of the tables of victims of different municipalities, to institutions such as Ombudsman's Office to the authorities and entities that support the process of integral reparation to victims.

Carmen Eliza Olaya, victims table coordinator said that from victims tables and in support of the institutions will continue to seek the promotion of culture to rebuild communities and said it is necessary to continue working for peace.

"We invite the victims, the community in general, the governmental entities and the international community to help us and help us in the process of reparation to the victims, the recovery of the territory and the reconstruction of society, we work every day to change the violence and that peace reaches all corners of Nariño", she concluded.