3,400 people are notified of their inclusion or not in the Victims' Registry In Antioquia 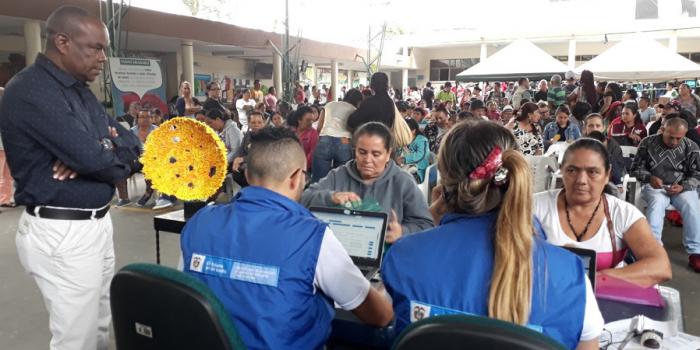 During two days in Medellin, at Belencito Victim Assistance point, west of the city and by the Victims Unit, the 3,400 victims of different events in the municipalities of the department of Antioquia were summoned, in order to give them in a personalized way the notification (document) in which they are given a response about their inclusion or not in the Unique Victims Registry and about the status of overcoming vulnerability to each of the attending victims.

This day is attended by people who declared in previous years before entities of the Public Prosecutor's Office crimes against them, which were assessed by the Victims Unit to determine which correspond to facts related to armed conflict recognized by the Law of Victims.

According to Wilson Cordoba Mena, director of the Victims Unit in Antioquia, "this is the first step to be recognized as victims of armed conflict, in order to access the measures of Law 1448 that opens the doors to the route of integral repair ".

In addition, people who have already overcome their conditions of vulnerability are also notified and if they continue with the reparation route, which ends with the compensation, according to the crime suffered and the situation of vulnerability that also "include rehabilitation measures, satisfaction actions, attention psychosocial, economic compensation and guarantees of non-repetition such as historical memory", said Cordoba.

According to the Victims Law, attention is established with a differential approach, so that easily accessible places are adapted, in order to attend promptly and quickly to victims with disabilities or elderly people.

Those who are included in the Single Victim Registry (RUV) may continue their comprehensive reparation process at the hands of the Victims Unit. Non-included respondents have reconsideration and appeals actions if they consider that they meet the criteria of law to be recognized.