Currently, there are 379,475 conflict victims that belong to the Public Force and the Armed Forces, of which 353,829 are direct victims. The Unit works to reduce under-registration and expand the offer of institutional services. 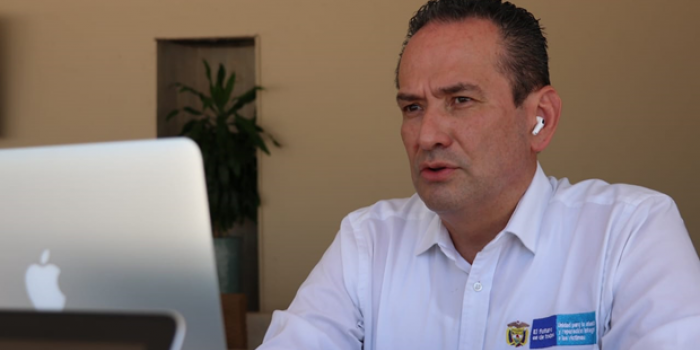 In a virtual forum held by the Universidad Militar on "Antipersonnel mines consequences, homicides and indiscriminate attacks", Ramon Rodriguez, the Unit for the Victims Director, stressed that "the national Government will continue supporting the Public Force victims throughout the process so they can rebuild their life projects.”

Rodriguez also pointed out that through the Unit, the barriers for the uniformed persons affected by the conflict entry to the Single Victims Registry have been eliminated and, he also added the entire route for their assistance and reparation has also been strengthened.

“Currently, there are 379,475 conflict victims that belong to the Public Force and the Armed Forces, of which 353,829 are direct victims; 332,210 are assistance subjects; 21,580 are homicide victims and 3,414 are antipersonnel mines, unexploded ordnance and improvised explosive devices victims.”

When detailing the uniformed victims’ situation in the Single Victims Registry, the Unit’s Director specified that 90.2% are men; 17.4% recognize themselves as belonging to some ethnic group and 73.4% belong to the National Army.

"There is something important in the entire aid and assistance Public Force victims’ route: its psychosocial support, both individual and in groups. We know about their difficult situation and, therefore, about their needs for aid regarding psychosocial approach,” stressed Rodriguez.

He also added that uniformed victim population is supported in individual reparation by administrative or judicial means, as well aa in the training and guidance they require. Proof of this are the results between 2019 and 2020, which show more than 4,200 benefited.

The Director pointed out that thanks to 1448 Law extension, those Public Force and Military Forces victims affected by the conflict will be able to keep being aided and repaired. "Within this assistance process, these victims have also been supported by our presence in the emblematic commemorations, or during Veteran's Day in coordination with the Ministry of Defense," he noted.