Luz Adriana Sepulveda, leader of Mutata’s Victims Promotion Committee, in Uraba, shares the sadness, joy and longing of a community that experienced its worst forced displacement on July 20th, 25 years ago. 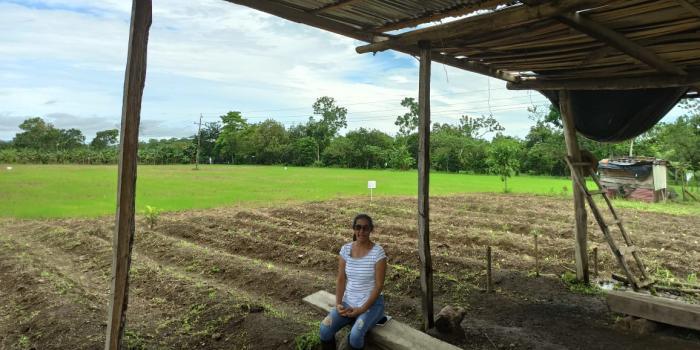 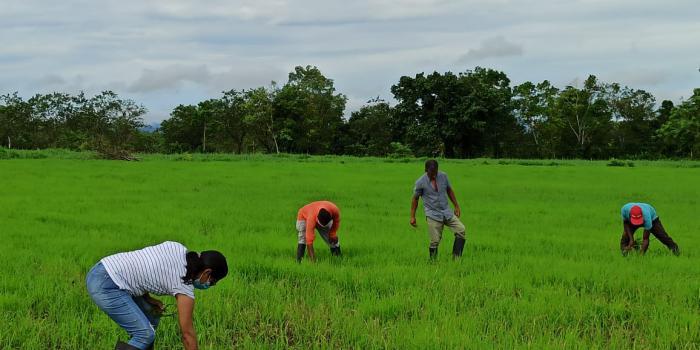 It looks like a nativity. The only things missing for a picture are the Bethlehem Star, the holy couple, the holy child and two animals on each side. Yes, Caucheras’ downtown, district of Mutata, in Uraba, where the church is located, looks like a nativity. And as it is known, the original nativity had an inverted ending: it announced a harsh ordeal. And if we refer to the "paradise" descriptions its inhabitants use for the town, let us remember that every Eden has a snake.

A few decades ago, there were other poisonous violence forms in that paradise, but the main decline happened in the 1990s, with the paramilitary’s arrival. Luz Adriana Sepulveda, born in Dadeiba, raised in Caucheras (who was forced displaced and had her husband murdered in 1997), gives credit to these facts. She leads the Impulse Committee in her community, which has a Collective Reparation Subject recognized by the Unit for the Victims.

Her testimony, which is lavish in anecdotes, contrasts three different eras, three groups and one true fear.

Luz Adriana arrived in Caucheras in the 1970s, following her brothers’ footsteps, who ventured into the uncertainty of a dream. The region’s economy was incipient. Its splendor came in the 1980s, when 66 farmers formed the Rubber Producers Association (Asoproca), a group that convinced Incoder to give land to the farmers in 1984. Prosperity was unstoppable. The rubber business stretched to reach fulfillment and happiness.

That brilliance was tarnished by mistrust and a threat: “The Army overwhelmed the community because they thought we were from the guerrillas,” says Luz Adriana. And there were also rules imposed by the guerrillas: “If there is gossip, this gets solved, or we kill you. If there are drug addicts, either they get their act together or they leave, or we kill them. If there are thieves, either they change or they leave or we kill them”, these were the precepts that, according to Luz, reflected the injunction.

Faced with this dichotomy that plunged the community into perplexity, breaking a sweat and being flexible like rubber was the safe path... until the arrival of the paramilitaries. In 1997, the omen of that via crucis was fulfilled.

“When the paramilitaries arrived with the Army, from Chigorodo, they wore the same uniform, and the only difference was the hood on their faces. They took us out from our homes, they gathered us in the soccer field, they disappeared a boy, they killed several Asoproca leaders; all of this because of the same accusation: helping the guerrillas”, testifies Luz Adriana.

The grievances memorial also includes some massacres and her husband murder the day her son was five months old. “I asked them why and they didn't answer me. I had to leave Mutata because at the morgue I told the police who killed him and how their truck was... They only told me to be calm. A moment later the culprits went downhill, from Mutata to Chigorodo, and the police stopped them. I pointed them out as the ones who had killed my son's father. The policemen talked with them and let them go. For this reason, the next day, after my partner's funeral, I had to leave for Medellin by plane.

What the rubber represented as a product faded. The sadness came and resignation vacated the region. Caucheras, Mutata and the Bejuquillo village were depopulated. Perhaps the most mediatic forced displacement of peasants occurred on July 20th, 1997, due to a combat between the guerrillas and the paramilitaries. Her brothers had the audacity or, perhaps, the insolence to ignore that reality. They remained there and one of them was an arson victim, somebody burned his house.

In Antioquia’s capital, Luz Adriana stayed from February 1997 to 2000, supported only by the values ​​instilled in her by her mother. “Imagine a peasant in Medellin with a five-month-old son. I didn't know what to do, I had only completed high school. I was disoriented by the death of my son's father. I lived in an invasion neighborhood. I was scared… I saw some people and the scared me. I though people were going to kill me. A friend told me to go to one of the main market squares in the city, the place where products from Uraba arrive. They told me to beg, no to ask for a job, it was just begging for food. After a while I said: I cannot do this.”

She decided to return to Caucheras despite her brothers’ warnings, who though she could die. “I thought it was better to be killed, but I could no longer live in Medellin. I had to ask permission to return. At that time, the area’s commander was Elkin Castañeda. When we returned, we had the need to continue with the social work that other people used to do, which was with the rubber product, but when we arrived, there wasn’t much”.

Other crops took over the land, and the recovery of rubber had two challenges: patience and money. Its viability begins after the tree is five years old, when its size allows the production of rubber and latex. So, this tree had to relinquish its reign in in favor of other products that would enable the community sustenance.

With the paramilitary demobilization, in 2005, the waters calmed down, and the inhabitants began another journey with other obstacles to get by.

In 2014, the community had a close encounter with the Unit for the Victims, which evolved into the designation of Caucheras as a Collective Reparation Subject in 2015, a fact that brought smiles back to its inhabitants.

“The Integral Collective Reparation Plan (PIRC in its Spanish acronym) has been very important for the entire community. In this plan we have tried to manage the water problem we experience, to fix the intakes and improve the water quality.”

Because of this plan, the Unit and the World Bank favored this Subject with a tractor, which the community has used for their benefit, and which has motivated them for another venture. “With this machine we have started a rice project for the first time. We want to see how it works for us so that we can continue with other projects. It is a new experience, because these lands are very dry, but we try to ensure that this rice is produced here, to be able to give their families this food and to be able to market what is left to meet other community needs.”

“We also rent the tractor to produce. From these resources we get, we used them for its maintenance and the other for community and social works. For example, during the pandemic, we took out resources to give food to several families, specifically made up of women household’s heads with children.”

The tractor has also made it possible to subsidize the medical treatment of its people and to help building the Community Action Board house with tables, chairs, and computers.

Regarding the individual, “some people in the community feel very happy with the Unit’s support; several have undertaken some productive project; some were benefited with Humanitarian Aid, which they have invested in chickens; others invested the compensation in a small business in the house and have tried to improve their life quality.”

However, despite these joys, the group feels this relationship is halfway. “Much remains to be done and the Unit knows it. It has not been easy, because the plan should also have the Mayor's office and the Governor's office involvement, that is why it is important to apply the Victims' Law, because more than compensation, we need the institutions’ support to improve the community’s life quality.”

It is clear that Caucheras will not be the same as it was 24 years ago, when there was formal employment and families didn’t live precariously. For now, they yearn for a good organization and the absence of grudges, among other illusions. “We hope the divisions end, that this becomes a community where everyone can live peacefully, and that our children can also live together, that the institutions and entities see Caucheras as a prosperous, calm community, without violence, that lives humbly, but calmly.”

In this way, Luz Adriana reminds us that a complete nativity scene needs a Melchor, Gaspar and Baltasar, and although it announces an ordeal, it still guarantees a resurrection.