Unit’s Officials emphasize the fact that, during this event, territorial entities listened to the victims to reach commitments and important developments in aid and reparation. 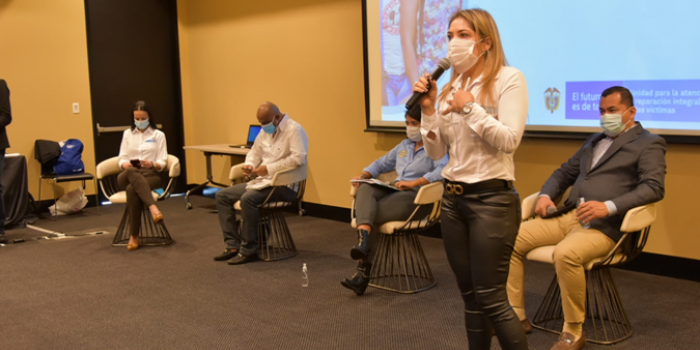 According to Aura Helena Acevedo, the Unit’s Interinstitutional Management director, there were close to 150 commitments during the IV Dialogue on Fundamentals.

This is the result of the two-day work from several groups, including the victims' representatives, spokespersons for the National Board and those from the country’s central and southern governors’ offices, who focused on merging projects and programs that benefit the victims’ population in the areas with Development Plans with a Territorial Approach (PDET in its Spanish acronym).

Acevedo explained that it was possible to gather delegates from the governors’ offices and from the Effective Victims Participation Board. "The Unit and the government will support departmental administrations in the follow-up of these commitments and verification of compliance regarding what was agreed in this event.”

"It’s a positive balance: all 32 departments took part along with Bogota, and they listened to our victims’ leaders," she stressed.

The Unit’s Participation Sub-director, Yani Zambrano, described that “from the victims’ point of view, we understood this entailed a construction process. Synergy is accomplished between entities and the victims in these dialogue spaces, along with territorial entities led by the Unit; they can get commitments that affect public policy,” she stressed.

Her opinion is territorial entities gathered with the victims, listened to them and, through this process, important commitments, and developments to improve aid and reparation for the victim’s population were made.

For Carolina Cotes, the Unit’s Nation Territory Sub-director, after this event, the next step is “what we have called a co-responsibility exercise, so we can apply what was agreed with the victims regarding their needs in the territory. The aim is for these commitments to climb up each of the government levels, so there can be a chance to meet the terms of those affected by the conflict in the full enjoyment of their rights.”