Victims exhibited their memoires in Nariño Plaza, in Pasto

With an outdoor photographic exhibition, victims of enforced disappearance, victims of State crimes, relatives of victims of the Police and the Army, as well as government entities and NGOs, took the Nariño plaza to attract attention of the Nariño community in an act called 'Memories of the South Counted by the Victims'. 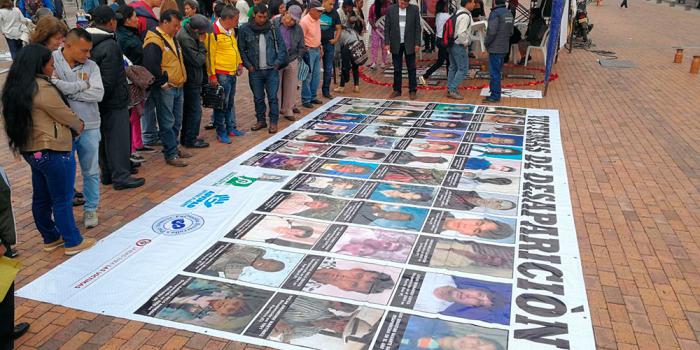 Different organizations of victims in Nariño department presented in Pasto a sample of historical memory of the conflict, with photographs, paintings, recitals, a cinema forum and artistic presentations. The survivors of the conflict took capital of Nariño downtown to tell the community that they do not forget their loved ones and that the conflict has united them to fight for their rights and for the memory of their relatives.

Rocio Granja, representative of the Integral Development for Victims Association (ADIV) Nariño regional, explained that the activity of visibility and awareness was an initiative of various organizations to exalt the memory of the conflict victims.

"We call this act 'Memories of the South narrated by the victims of the conflict' and it is an initiative taken to the public square to pay homage to our loved ones and to all of us who have suffered from the impact of the conflict, we want Nariño and Colombia to know that as victims we have contributed much pain and suffering to country history and that now we struggle to know the truth, to start over. In some way it is to be reborn in pain and to have hope, it is to help us among the victims, to be supportive and to fight for our rights. We want to tell the Government and the institutions not to forget us, "he said.

Gloria Achicanoy, from Forced Disappearance Victims Association (Avides) said that in Nariño there are hundreds of people who still hope to know the fate of their relatives.

"We are hundreds of mothers, wives, sisters, children, who for several years have counted the days and hours to know where our disappeared relatives are, we look forward to Peace Special Justice (JEP) to let us know the truth and so we can rest a bit and leave that mourning in life that always accompanies us, "said Gloria, who recalls that on this date 24 years ago his son Miguel Alexander Tovar disappeared.

Diolly Paola Riofrío, leader of the Women and Peace Association (Asmupaz), works with women dedicated to sex work, LGTBI population, and in general with women victims of the armed conflict. She has achieved, through constant management, the claim of rights for this population.

"We work from the association to support the trans population, sexual workers and in general women and people stigmatized by society, who have also been violated in their rights by the conflict, that is our struggle," says the leader, who highlights in the regional sphere as a defender of rights and the search for the creation and application of public policies with a differential approach.

The day was supported by the Unit for Victims in Nariño, the Governor of the department, the mayor of Pasto, the National Police, the Colombian Army and various public and private organizations, and commemorated the National Day of Memory and Solidarity with the Victims of the conflict.