That was one of the messages from the victims who were present at the commemoration of Victim’s Solidarity Day which took place today on the boulevard of Buenaventura. Culture was the protagonist today, the event was attended by the General Unit Director, Yolanda Pinto. 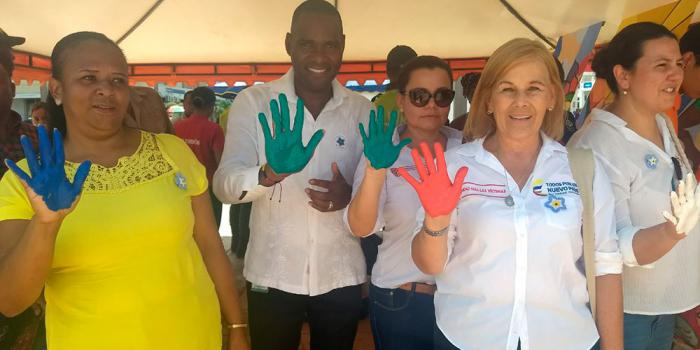 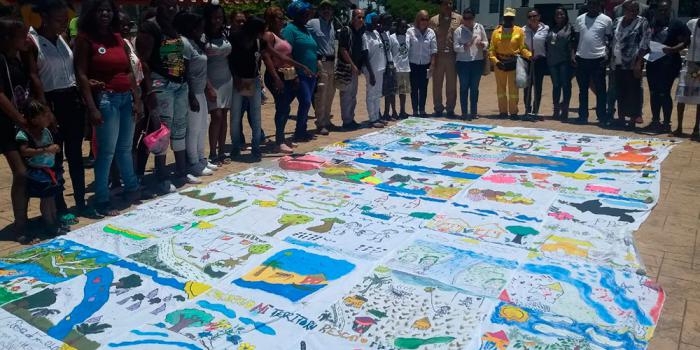 "Peace begins with forgiveness," said Bolivia Valencia vehemently in the middle of a poem she shared with those attending the commemoration of the Victim’s Solidarity Day in Buenaventura, held on the boulevard of this city. Mrs Bolivia spoke of pain and hope for a new country, feelings she shares with the other mothers whose children were killed in the massacre of Punta del Este neighborhood.

In this activity, led by the Unit for Victims, honor was paid to victims and those who have suffered because of the war in this region were remembered.

Yolanda Pinto, general director of the Unit, took the words of Mrs. Bolivia and recalled the value the end of the armed conflict has for the country; this conflict left many mothers without their children. "We do not want war anymore. Today we are here to remember our victims, this should not only be done today in this commemoration. The victims left by the war are still in our memory. "

The public ceremony of commemoration gave priority to cultural expressions. A gastronomic sample with typical products of the Pacific reminded the attendees "the flavors of a Colombia in peace," as France said, one of the victims who developed the products.

There was also an exhibition of large format paintings called "Survivors". In four paintings, young victims captured the tools that have allowed them to overcome the wounds of the conflict. The works speak of faith in God, of music as an instrument of redemption, of the importance of the family. One more canvas arrived at the white boulevard and little by little it was taken with the prints of the assistants, who expressed their solidarity with the victims of the conflict.

One of the most moving moments of the day was the delivery to the director Pinto of a plant planted in a very special garden. The delivery was made by Marloby Mina, who told the official: "This vessel broke into pieces, just as we broke the victims inside. Pasting it is difficult, it will never be the same, but with help, everything is easier. Even working with love and company, it may be better than before. "

In the same way, an activity called "Burning bad memories" was carried out. Fabiola Perdomo, territorial director of the Unit for Victims in Valle del Cauca, explained that children and young people wrote messages about everything they do not want to be repeated as a result of the war, roles that were burned in the presence of all. "We want to burn the indifference, the pain, the weapons, the bad words, the discrimination," the boys wrote in their little letters.

In this activity, the Unit for Victims worked hand in hand with the Mayor's Office of Buenaventura, the Table of Effective Participation of Victims, the Table of Access to Justice, Victims, Protection and Memory, Fundescode, Pastoral Social and Fupad.

In Buenaventura, a city of about 424,000 inhabitants, it is estimated that there are 151,574 victims subject to care and / or reparation, which means that one out of every three people has been a victim of the conflict. In this district, 95% of those who are victims have suffered forced displacement.

In this locality resources have been set aside for $ 46,010 million for indemnities and $ 158,373 for humanitarian aid and assistance.

The register of victims recognizes 8.6 million victims of the conflict, 17% of the country's population. 80% victims of forced displacement, 10% victims of homicide and 4% victims of threats. 50% men, 50% women, 28% boys and girls, 12% belonging to an ethnic minority.

87% of the facts declared as of the effectiveness of the Victims Law correspond to events that occurred before 2012. The number of new victims in 2017 was the lowest in the last 25 years.

135 adolescents and young people left the ranks of the FARC and today they receive protection from the State to guarantee a process of restoration of adequate and integral rights.

222,500 hectares of land have been restored to more than 30 thousand people.

The attention to victims of the conflict is centralized through 196 Regional Centers and Points of Service throughout the national territory, where they can go to access all the benefits of the Victims Law.

Since 2012, 4.3 billion pesos have been invested in humanitarian assistance to victims, with an 87% reduction in the annual resource required to meet the humanitarian emergency, comparing 2017 and 2012.

Public policy undergoes a transformation through dialogue with victims: from one of struggle for recognition, to one of realization and guarantee of rights. The participation of victims is stronger than ever through 1,057 participation tables democratically elected at the municipal, departmental, national and international levels.

The implementation of the Agreement with the FARC is an opportunity to strengthen the policy of repair and reconciliation. Today, 460,000 displacement victims have overcome their vulnerability and are socioeconomically stable and locally integrated.

104 billion pesos have been invested from the national level in co-financing territorial entities with projects for the attention to victims, benefiting 112 thousand people.

The comprehensive reparation policy in Colombia is the most ambitious in the world for its coverage and its integrality by covering the components of satisfaction, restitution, compensation, rehabilitation and guarantees of non-repetition.

Nearly 800 thousand victims have been administratively compensated, the largest number in the world with an investment of 5 billion pesos.

More than 700 thousand victims have participated in strategies of emotional recovery and psychosocial rehabilitation.

One third of the women victims of sexual violence have been compensated and have received psychosocial accompaniment.

153 thousand victims have participated in emotional recovery strategies at individual and group level and psychosocial rehabilitation, 74% of which are women.

The best guarantee of non-repetition is the effective implementation of the Peace Agreement.